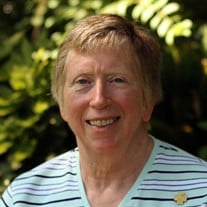 Sr. Patricia Ann Burke, rc, 69, a Religious of the Cenacle, passed away Thursday, August 25, 2016 surrounded by her beloved Cenacle Sisters, family members and friends. She had finished a six-year journey with cancer by slipping gently into the loving arms of her Jesus. She was born September 17, 1946 in Brooklyn, NY to William and Mary Burke. She is survived by her sisters Eileen M. Burke and Kathleen F. Burke, niece Megan and nephew Liam, along with beloved cousins and extended family. At the time of her death, she was the Local Leader of the Cenacle Sisters in Houston and President of its Board of Directors. She is a past member of the leadership team of the North American Province of the Cenacle Sisters, where she served as a provincial councilor. She also served as local treasurer in many Cenacle retreat centers. She often joked, “I’ve never taken a bookkeeping course in my life and I’m always put in the Finance Office!” Sr. Pat entered religious life in 1969, professing temporary vows in 1972 and perpetual vows in 1978. She served in Cenacle ministries in Texas, Florida, Louisiana, Illinois, Colorado, Minnesota and Ireland. She ministered on parish staffs in the Archdiocese of Galveston-Houston at St. John Vianney, Christ the King and St. Bartholomew. While caring for her aged father in Arizona, she served in a local parish. As a Cenacle Sister, she also served in leadership with the Cenacle Auxiliaries (vowed laywomen who live their vocation in the world) and was involved in the spiritual formation of Cenacle Associates (women and men of any walk of life who live Cenacle heritage and spirituality in their own circumstances) around the country. A cousin described her as “a compassionate woman, someone who could have done anything with her life, e.g. been a CEO of a major corporation, but instead she chose a life of service for others.” She gave 100% of herself right up to the time of her death. Sr. Pat was also a member of Theresians International. She often moved around the country in her ministry with the Cenacle Sisters, and would always be able to find a Theresian community. She was a member of Theresians du Matin in Mundelein and most recently Theresian VII in Houston. She worked closely with Theresians in leadership for over ten years, serving as Facilitator of TI Board meetings, the USA National Leadership Team and serving on the Theresian Foundation Board of Directors. After serving a full nine years on the Foundation Board, her presence was deemed so valuable she was invited to stay on as an Emeritus member. In 2013, Sr. Pat received the Woman of Vision recognition. Firmly proud of her Irish heritage, Sr. Pat enjoyed events at the Center for Irish Studies at the University of St. Thomas. She held dual citizenship. Her love of travel and her EU passport came in handy on the many international trips she took for the Cenacle or for the Theresians: Brazil, France, Ghana, Ireland, Indonesia, India, Japan and New Zealand were just a few of the countries to which she traveled. Many of these she visited after she was diagnosed with cancer. One of her joys was to participate in a pilgrimage to France in 2014 to pray at the origins of the Cenacle Sisters. The life and writings of St. Thérèse Couderc, Cenacle Foundress, gave her comfort as her cancer began to progress beyond treatments. On that pilgrimage, she also bathed in the grotto at Lourdes. Although she asked the Lord to heal her, she had surrendered herself to his gracious will, confident in his faithful love for her, whatever the outcome in the months ahead. Health challenges from childhood and cancer did not stop her from anything she put her mind to. She received an undergraduate degree (Psychology) from the University of San Francisco, a Master of Religious Education from the University of St. Thomas in Houston, a Master of Arts degree (Christian Spirituality) from Creighton University in Omaha. At the time of her death she was a Doctor of Ministry Candidate (Spirituality) at Barry University in Miami. To love God and serve his people with all of her heart, mind and strength gave Sr. Pat the greatest joy. Relationships with a wide variety of people were a priority for her. She enjoyed good conversation, good music (especially if it was Irish) and a good meal with those whom she loved. We all will miss her, but she said that she wanted her death to be a celebration of God’s goodness and generosity to her both in this life and in eternal life. The Cenacle Sisters and Sr. Pat’s family will be present to receive friends Wednesday, August 31, 2016 from 6:00 PM until 9:00 PM with a Vigil beginning at 7:00 PM at Dettling Funeral Home, 14094 Memorial Dr., Houston, TX 77079. The Funeral Mass will commence Thursday, September 1, 2016 at 2:00 PM at St. John Vianney Catholic Church, 625 Nottingham Oaks Trail, Houston, TX 77079. A reception will follow Holy Mass on the church campus. Interment at a later date in the Cenacle Sisters’ area at Queen of Heaven Catholic Cemetery in Chicago. In lieu of flowers, please consider contributions in Sr. Pat’s memory to The Cenacle Retreat House, 420 N. Kirkwood Rd., Houston, TX 77079.

Sr. Patricia Ann Burke, rc, 69, a Religious of the Cenacle, passed away Thursday, August 25, 2016 surrounded by her beloved Cenacle Sisters, family members and friends. She had finished a six-year journey with cancer by slipping gently into... View Obituary & Service Information

The family of Sr. Patricia Ann Burke, rc created this Life Tributes page to make it easy to share your memories.