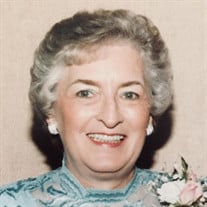 Patricia Maureen DeBesse, 88, of Houston passed away April 17, 2020. She was born on June 18, 1931 in Watertown, Massachusetts to Charles Joseph Shutt and Barbara McDonough Shutt. She was preceded in death by her daughter Laura DeBesse. Her husband Robert Francis DeBesse survived her but passed away on June 27, 2021. She is survived by daughter Jean DeBesse Hoch and husband Roger, son Bob DeBesse and wife Janet, son David DeBesse, son Tom DeBesse and wife Linda. She is also survived by grandchildren Brittney (Kevin), Kaila (Laine), Cameron (Heather), Christine, Thomas, Megan, Sarah, Samantha and Brooke, and by great grandchildren Ash, Reese, Rori and Perry. She is also survived by many nieces and nephews. The youngest of six siblings, Pat graduated from St. Patrick’s High School and attended Boston Business School, after which time she began work at Shell Oil Company. It was at Shell that Pat met her eventual husband, Robert F. DeBesse. Bob and Pat married in 1957. After their marriage, Pat left Shell and began the 24 hour a day/7 day a week job of giving birth to and raising 5 children, while also making numerous cross-country moves due to Bob’s career. Eventually, the family settled in Houston. Pat embraced her new home and developed strong community ties, while at the same retaining her love for and pride in her Boston and Irish roots. Pat was a fixture at her children’s sporting events, often as a volunteer in some capacity (including as a founder and charter member of the renowned “Lunch Bunch”), but always as the #1 cheerleader for her children and their teams. She also was active at St. John Vianney, and at St. Joseph’s Hospital, where she provided care and comfort to many patients dealing with life-threatening illnesses. With her husband Bob, Pat was a benefactor to many worthy organizations, such as the Holy Name Retreat Center, the University of St. Thomas in Houston, and Ave Maria University in Florida. Pat was a woman of strong and deeply held convictions. She was an avid sports enthusiast, with a special place in her heart for the Boston Celtics, the Boston Bruins, and all things “sport” at Stratford High School, including the Stratford Spartaniares. She was a woman who loved to laugh and to share that laughter with others. And Pat, perhaps above all, was loyal, loyal to her family, to the people she loved, and to the beliefs that drove her. She was a beloved wife, mother, grandmother and great grandmother. And a good and trusted friend to many. The family will be present to receive friends Monday, August 9, 2021 from 6-8 p.m. at Dettling Funeral Home, 14094 Memorial Drive, Houston, Texas 77079. The Funeral Mass will be held at 10:30 a.m. Tuesday, August 10, 2021 at St. John Vianney Catholic Church, 625 Nottingham Oaks Trail, Houston, Texas 77079. In lieu of flowers please consider a donation to Semper Fi & America’s Fund or the Gary Sinese Foundation.

Patricia Maureen DeBesse, 88, of Houston passed away April 17, 2020. She was born on June 18, 1931 in Watertown, Massachusetts to Charles Joseph Shutt and Barbara McDonough Shutt. She was preceded in death by her daughter Laura DeBesse. Her... View Obituary & Service Information

The family of Patricia Maureen DeBesse created this Life Tributes page to make it easy to share your memories.

Send flowers to the DeBesse family.