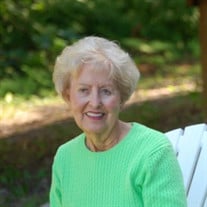 Patricia Goss Haltom, age 84, of Houston, Texas passed away on May 5, 2016. She was born in Waco, Texas on April 22, 1932 to William Bryan Goss and Jewell Wright Goss. She grew up in small house a few blocks from the Baylor University campus and graduated from Waco High School in 1950, where she was a cheerleader for 2 years. She then attended Baylor University and graduated in 1955 with a degree in business administration. While at Baylor, she was president of Kappa Alpha Theta sorority. She was life-long, avid Baylor Bear fan. Upon graduation, she moved to Dallas to work where she met her future husband, Hal Vester Haltom. They were married at the Seventh and James Baptist Church in Waco in 1958. They celebrated their 58th wedding anniversary last month. After they were married, they moved to El Paso, where she taught elementary school. They later moved to Houston, where she spent the rest of life. She was a stay at home mom who raised three children while helping her husband run his business for more than 30 years. She loved to play tennis and golf, and read and play bridge and other card games. She always had a good book with her that she had just finished reading ready to pass on to you. She was one of the founding members of Memorial Assistance Ministries and volunteered there for over 20 years. Later at Chapelwood, she participated in the The Gathering, Bolder Activities, Sunday School, and the Prayer Ministry. The last 25 years were probably the favorite period of her life. She loved being a grandmother and absolutely adored her grandkids. She made it to every school activity and sporting event possible and was extremely proud of each of their accomplishments. She always was available to babysit and help out when asked. She was the most loving, kind, generous, and thoughtful person and never had an unkind word for anyone. She had a tremendous positive influence on her grandkids. She is survived by her husband, Hal Haltom; her sons, Hal Haltom, Jr. and wife Marsha Haltom and Todd Haltom and wife, Sandy Haltom; her daughter, Valerie Lynn and husband Mike Lynn; sister-in-law, Betsy Goss; grandchildren, Travis Haltom, Cameron Haltom, Haley Haltom, Mackenzie Haltom, Mason Haltom, and Patricia Haltom; great grandson, Landon Haltom; and many nieces and nephews. She was preceded in death by her parents, William and Jewell Goss; brother, Jack Goss; sister Laverne Buehring and husband Ted Buehring; and grandson, Matthew Haltom, Jr. The memorial service will be conducted at eleven o’clock on Wednesday, May 11, in the Chapel of Chapelwood United Methodist Church. Immediately following the service, all are invited to greet the family during a reception at the church. Instead of a customary remembrance, please consider a donation in her memory to Memorial Assistance Ministries at 1625 Blalock Road, Houston, Texas 77080.

Patricia Goss Haltom, age 84, of Houston, Texas passed away on May 5, 2016. She was born in Waco, Texas on April 22, 1932 to William Bryan Goss and Jewell Wright Goss. She grew up in small house a few blocks from the Baylor University campus... View Obituary & Service Information

The family of Patricia Goss Haltom created this Life Tributes page to make it easy to share your memories.

Patricia Goss Haltom, age 84, of Houston, Texas passed away on...

Send flowers to the Haltom family.