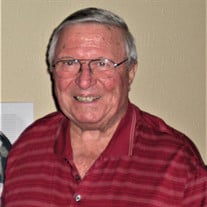 Patrick Wayne Brune, age 82, passed away peacefully in Houston, Texas, on Sunday, February 3, 2019. He was born in San Antonio, Texas, on October 4, 1936, the son of Lawrence G. and Viola V. Brune. Pat is preceded in death by his parents and his beloved wife, Barbara. Pat is survived by his son, Wayne, and his wife, Barbara; and daughter Shannon, and her husband Jason Finger; grandchildren, Cody Finger, Alyssa Finger and Sarah Brune, along with extended family. Pat attended Brackenridge High School in San Antonio, Texas, where he met the love of his life, Barbara. They married on February 1, 1957, in San Antonio, Texas, when he was 20 and she, 18. They spent their early years of marriage in College Station while Pat completed his courses to obtain a Bachelor of Science Degree in Mechanical Engineering from Texas A&M University. While at Texas A&M, Pat was a member of A Ordinance in the Corp of Cadets. After completion of his degree, Pat served in the Army Reserves for six months in Aberdeen, Maryland. Pat was employed by H.B. Zachry Company in various locations in the early 1960’s. In 1964, he moved the family to Houston to begin working for Armco Steel Corporation. Pat worked as the Rolling Mill Manager for their Wide Flange Beam Mill until 1984. In 1986, Pat was recruited by Nucor Steel to advise, build, and help run the first wide flange beam mill located in Blytheville, AR and the first of its kind built in the USA since 1976. In 1995, Pat transferred to the Nucor facility in Jewett, Texas, to be closer to his family. While at Nucor/Jewett, he served as Manager of Rolling Technology and as a consultant on various Nucor projects until his retirement in 2009. Pat enjoyed sports his entire life! In his younger days, it was football and baseball, but tennis was probably his favorite! In his middle age years, he played in weekly tennis matches with friends as well as coaching his son and daughter in their Little League activities. You could always count on Pat for carpooling, building and mowing the fields, and even umpiring a couple of times! Pat was also active with Southwest United Methodist Church and served on various committees throughout his time in Houston. The one activity that Pat loved as much as anything was rooting for his Texas A&M Aggies, and it didn’t matter which sport, he rooted for ALL of them! In his spare time, Pat always had a passion for working on cars. He was always very handy and claimed on more than one occasion that you could count on one hand the number of times “we” had to call a repairman to the house to fix something! Pat loved his family and friends dearly and enjoyed the time he spent with everyone. He will be greatly missed by all who knew him. A memorial service will be held on Friday, February 8, 2019, at 2:00 pm at Memorial Drive United Methodist Church, 12955 Memorial Drive, Houston, Texas, 77079. A graveside service will be held on Saturday, February 9, 2019, at 11:00 am at the Aggie Field of Honor, 3800 Raymond Stotzer Parkway, College Station, Texas, 77845. In lieu of flowers, please consider donating to the Texas Aggie Corps of Cadets Association by calling 877-892-4222 or their website, https://corpsofcadets.org

Patrick Wayne Brune, age 82, passed away peacefully in Houston, Texas, on Sunday, February 3, 2019. He was born in San Antonio, Texas, on October 4, 1936, the son of Lawrence G. and Viola V. Brune. Pat is preceded in death by his parents... View Obituary & Service Information

The family of Patrick Wayne Brune created this Life Tributes page to make it easy to share your memories.

Send flowers to the Brune family.