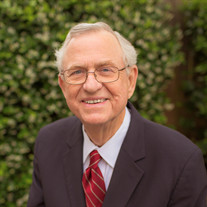 Paul Douglas Bacon, born January 16, 1946, passed away on June 21, 2018, after a brave battle with cancer. Paul grew up in Ft. Worth, Texas. He graduated from TCU in 1969 and earned a law degree at the University of Houston, where he was a member of the Law Review. Paul was very proud of his judicial clerkship for Judge John R. Brown, then the Chief Judge of the United States Court of Appeals for the Fifth Circuit. Paul practiced law for 35 years, specializing in representing municipalities in and around Houston. He co-founded the law firm Bacon & Wallace, LLP, from which he retired in 2006. Paul assisted in the creation of numerous neighborhoods and communities in the greater Houston area and was well regarded for his integrity, honesty and concern for his clients. Paul loved music. During his teens and college years, Paul was a professional singer and musician. His recordings were played on regional radio stations across the South and he appeared multiple times as a soloist singer on national television, including the national finals of Ted Mack & The Original Amateur Hour. Paul played multiple instruments (albeit some better than others) and particularly loved playing the piano for his grandchildren. The son of a school teacher, Paul was a lifelong student, especially of American and European history. He believed that education was a cornerstone of success and the right to pursue a good education belonged to everyone regardless of socio-economic standing. He founded the non-profit organization Can-Do in the 1990s, which connected University of Houston college students with urban middle school students from underserved communities in an after school mentoring program. The program was awarded federal grants and was eventually absorbed by HISD. Paul was a great family man and a loyal and reliable friend. He was married to Cathy for almost 49 years, and was happiest when they were spending time with their family, playing golf, attending TCU football games with college friends, hiking the Canadian Rockies or traveling together, which they did zealously. He was a loving and devoted father. Evidence of his devotion is his perfect attendance of every game his kids ever played, many of which were nearly unwatchable (even his kids agree). He was close to his brother's family and Cathy's family, a fixture at all family gatherings and reunions. He valued his and Cathy’s close relationships with many of their old neighborhood friends. In recent years, he especially loved playing golf with his buddies at Pine Forest Country Club. He was loved and will be sorely missed by his family, friends and colleagues. Paul was a devoted Christian, a longtime member at Grace Presbyterian Church, and in recent years a member of St. Martin's Episcopal Church, where he and Cathy were married. Paul is preceded in death by his parents, R.V. Bacon and Johnnie McElroy Bacon. He is survived by his wife and best friend, Cathy; his brother Edward and wife Lynn and their children and grandchildren; his son Doug and wife Kate and their sons, Gus and Jamie; his son Michael and wife Jocelyn, and their daughter, Margot, and son, Cole; his mother-in-law, Katie Boice McGready; and his sisters- and brothers-in-law and their families. Paul's funeral will be held on Thursday, June 28, 2018 at 11 am at St. Martin's Episcopal Church, located at 717 Sage Road, Houston, TX 77056. In lieu of flowers, the family requests that donations be made to The Parish School, a non-profit school that addresses speech and language learning differences in young children (11001 Hammerly Blvd, Houston, TX 77043; www.parishschool.org), and to The Center, a non-profit organization focused on the training and empowerment of adults with intellectual and developmental disabilities (3550 West Dallas, Houston, TX 77019; www.thecenterhouston.org).

Paul Douglas Bacon, born January 16, 1946, passed away on June 21, 2018, after a brave battle with cancer. Paul grew up in Ft. Worth, Texas. He graduated from TCU in 1969 and earned a law degree at the University of Houston, where he was... View Obituary & Service Information

The family of Paul Douglas Bacon created this Life Tributes page to make it easy to share your memories.