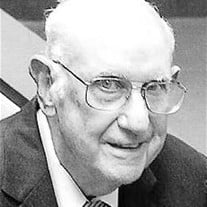 Paul Cole, 93, peacefully went home to be with the Lord on Monday, March 5, 2018. The youngest of four sons, he was born November 2, 1924 in Morgan, TX to William H. and Ada Rundell Cole. He graduated with honors from Waco High School in 1942 and enrolled at Baylor University. When he was 18, Paul enlisted in the Army Air Corps. During WW II he flew 50 combat missions as a B-24 pilot in Italy. Upon discharge after the end of the War, he re-enrolled at Baylor and graduated with a BBA in 1947. He then earned an MBA from Northwestern University in 1948. Paul married Mary Kathryn Rucker in 1945 and they had four children, Carlyn, Mitchell, David and Karen. After 53 happy years together, Mary died in 1998. Paul married Sarah Lee in 2000. After completing his education, Paul worked for Arthur Andersen & Co., Austral Oil Company and American Exploration Company, from which he retired in 1989. He served as a Trustee/Director of The Memorial Hermann Hospital System from 1968 until 1999 and thereafter as Trustee Emeritus. Paul has been a member of South Main Baptist Church since 1949. Over the years he has served the church in countless ways, including as a Sunday School teacher and Superintendent, Yokeman, Deacon & Chair of the Diaconate, Chair of the Audit, Finance and Personnel Committees and as a founding member of the South Main Foundation. Paul and his boat were also fixtures at church youth camp for many years. His faith was the foundation of his life making him a man of high character, conviction and integrity. Likewise, his humble and generous nature, as well as his love for his family, made Paul the husband, father, grandpa and friend that all admired and loved. Preceding him in death were his first wife, Mary, his daughter Carlyn Sweetman and his 3 brothers, John, Carl and Harold. Surviving him are his wife, Sarah Cole; three children, Mitchell Cole, David Cole (Paula) and Karen Skinner (Bobby); son-in-law Karl Sweetman (Brenda); grandchildren, Lauren Buchanan (Jim), Jennifer Gerl (Norbert), Kim Sinkov (Nikolai), David Cole Jr. (Kala), Matthew Cole (Julie), Chris Cole (Heather), Katy Welch (Taylor), Sarah Ockwood (Matt) and Cole Skinner; and 21 great grandchildren and many nieces and nephews. Also surviving are his wife Sarah’s family, whom he loved and accepted as his own. A Memorial Service will be held at 1 p.m. on Saturday, March 24 at South Main Baptist Church, 4100 South Main, Houston, TX 77002 with Dr. Steve Wells officiating. Memorials may be made to the Paul Cole Endowed Scholarship at Baylor University, One Bear Place #97050, Waco, TX 76798-7026; The Mission Outreach at South Main Baptist Church; or the charity of your choice.

Paul Cole, 93, peacefully went home to be with the Lord on Monday, March 5, 2018. The youngest of four sons, he was born November 2, 1924 in Morgan, TX to William H. and Ada Rundell Cole. He graduated with honors from Waco High School in 1942... View Obituary & Service Information

The family of Paul Rundell Cole created this Life Tributes page to make it easy to share your memories.

Paul Cole, 93, peacefully went home to be with the Lord on Monday,...

Send flowers to the Cole family.