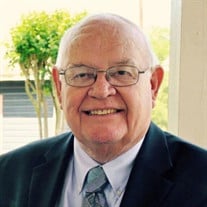 Paul Eben Crocombe died peacefully on Sunday, October 18th, 2020, loved by family and friends. He was 83 years old. Paul was born at Mercy Hospital in Durango, CO on Easter Sunday, April 25, 1937. He grew up in Denver, Colorado and graduated from Colorado State University, June 4, 1960 with a Bachelor of Science Degree in Industrial Construction Management. Paul entered the United States Navy Officer Candidate School in Newport, RI in 1960. Lieutenant Commander Paul Crocombe was Honorably discharged from active duty from the USS Shangri-La (CVA-38) in 1963. He also entered the U.S. Naval Reserve and was active until 1979. On May 25, 1963, Paul married the love of his life, Claudia (Hite) at the Mayport Naval Station, Mayport, FL. They resided in Jacksonville, FL, New Orleans, LA, Tulsa, OK, and Birmingham, AL before moving to Houston, TX in 1970 where they lived for the remainder of their lives. Paul, Claudia, and their family began attending Grace Presbyterian Church in 1970 when services were being held at Walnut Bend Elementary school, while the current Church was under construction. Paul was an usher and enjoyed watching Claudia play handbells and sing in the Grace Choir for more than 35 years. Paul loved coaching Bruce and Stephen’s baseball and football teams at Memorial Ashford Little League and whether coaching or cheering on his sons – he never missed a game. Paul also enjoyed sailing trips with his dear friends in Galveston Bay and traveling with Claudia. Paul was a loving husband, father, grandfather, friend, coach, and role model to many. Paul is survived by his two sons Stephen and Bruce. Stephen and his wife Karin of Wichita, Kansas have three children: Zachary (Stacy), Kendall, and Ellen Rose (Nate). Bruce and his wife Courtenay of Spring, Texas and have four children: Chase, Lauren (Joshua), Haley, and Paige, and six grandchildren: Jayden, Jackson, Lennox, Laney, Lily, and Riley Rain. Paul is also survived by his brother Norman (Patricia) of Cheyenne, Wyoming, his sisters Catherine Newton of Denver, CO, Norah Bishop of Taos, New Mexico, and numerous nieces and nephews. He is also preceded in death by his father Arthur Eben Crocombe and mother, Nellie Della Kilker. A Memorial Service celebrating Paul's life will be held Friday, October 30, 2020 at 12:00 PM at Grace Presbyterian Church, 10221 Ella Lee Ln., Houston, TX 77042. We understand that due to COVID-19 travel may be difficult for many. We certainly understand the need to stay safe. We will make every attempt to record the services for anyone who would like an audio/video copy.

Paul Eben Crocombe died peacefully on Sunday, October 18th, 2020, loved by family and friends. He was 83 years old. Paul was born at Mercy Hospital in Durango, CO on Easter Sunday, April 25, 1937. He grew up in Denver, Colorado and graduated... View Obituary & Service Information

The family of Paul Eben Crocombe created this Life Tributes page to make it easy to share your memories.

Send flowers to the Crocombe family.