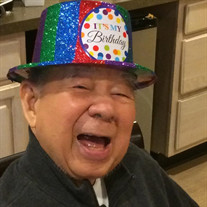 Paul Chaiyo Kattapong Sr passed away Nov 9, 2021 at the age of 104. Paul was born in Bangkok, Thailand on May 4th 1917. He had three sisters and three brothers. Paul converted to Christianity in his youth, and later attended Chulalongkorn University where he starred as the soccer goalie for the university’s soccer team, as well as Thailand’s national team. He was a member of the Thai underground, fighting the Japanese during World War II. After the war he received a YMCA scholarship to attend George Williams College and immigrated to the United States. It was in Chicago that he completed his Bachelors degree, met his future wife Verna Anna Voth, and obtained his citizenship. Paul and Verna were married in 1954, and later moved to Pacific Grove, California where he worked for the U.S. government at the Defense Language Institute. In 1964, he moved his family to Okinawa to coordinate and deliver foreign language programs for the military during the Vietnam War (he spoke eight languages). He and his family remained there until 1975 when he was transferred to Lackland Air Force Base in San Antonio. It was there that he returned to school to complete his Masters of Arts degree at the University of Texas at San Antonio, where he subsequently held the distinction of being the oldest living alum. In 1982, he accepted a language specialist position in Stuttgart, Germany where he remained until he retired in 1989 with 31 years of service to the U.S. government. He loved watching sports, particularly the Olympics (track and field and soccer). He was also a fan of the San Antonio Spurs and the Dallas Cowboys. Paul was also an avid reader and story teller. Another favorite pastime was striking up conversations with total strangers, and asking them to try to guess his age (he always looked very young for his age). Paul was preceded in death by his parents, his wife Verna, daughter Dr Vivienne Jane Kattapong, and three sisters and two brothers. He is survived by son Paul Jr (Sarah), daughter Dr Kristienne Kattapong (Adam Graber), grandchildren Dr Ione Locher, Yon Locher, Chaiyo Locher, Voth Locher, Seth Kattapong- Graber, Evan Kattapong-Graber, Kimberly Dettling (Ross), and Lauren Kattapong. Paul was very proud of his U.S. citizenship and was a true patriot! He was a devoted husband, a loving parent and grandparent, and was immensely proud of his grandchildren; always placing a high value on education.

Paul Chaiyo Kattapong Sr passed away Nov 9, 2021 at the age of 104. Paul was born in Bangkok, Thailand on May 4th 1917. He had three sisters and three brothers. Paul converted to Christianity in his youth, and later attended Chulalongkorn... View Obituary & Service Information

The family of Paul Chaiyo Kattapong Sr. created this Life Tributes page to make it easy to share your memories.

Send flowers to the Kattapong family.