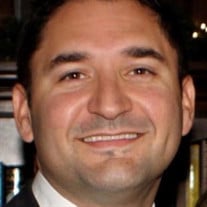 Paul Junior King, 41, of Houston passed away Sunday, March 15, 2020 while enjoying one of his favorite pastimes, cycling. Paul was born June 3, 1978 in London, England to Paul Arthur King and Edwina Attard King. He is survived by his parents; wife of 16 years, Vanessa Marie King; daughters, Imogen Marie King and Lucia Violet King; sister, Janine Spence & husband Tom; mother-in-law and father-in-law, Marie and Alan Richmond; sisters-in-law, Danielle Hume & husband Andy, Louise Smith & husband Andy; Nieces and nephews; Noa Spence, Alfie Hume, Oliver Hume & Eleanor Smith. He attended Fettes College in Edinburgh, Scotland and University College London where he attained his Master’s Degree in Chemical Engineering. He spent his entire career with Transocean, and was hugely respected and successful, becoming Senior Manager of Operations and Efficiency. He met the love of his life, Vanessa while at university in London and they married in April 2003. They moved to Houston, where Imogen and Lucia were born, and travelled extensively with his work, making many lifelong friendships along the way. Paul lived life to the full, he was an avid sportsman, playing rugby for the national team of Malta. He enjoyed soccer and was a dedicated fan of Tottenham Hotspur and encouraged his daughters to support them as well. He also enjoyed coaching his daughter’s basketball team. As much as he loved sports, it did not even come close to how much he loved his wife and two daughters. Paul was a kind, generous, and truly lovely person, who adored his family, and they adored him too. He was a caring son and loving brother, as well as an amazing husband, and the perfect Daddy, supporting them in everything they did and brightening up their days with lots of fun and laughter. Paul’s fun loving nature made him the life and soul of any party, and he will be a huge loss to all who had the privilege to meet him, however he most certainly will never be forgotten. Due to the Coronavirus Paul will be remembered in a private family ceremony and laid to rest in Memorial Oaks Cemetery. A Memorial Mass to celebrate his life with his family, friends and colleagues will be scheduled at a later date. In lieu of flowers the family would appreciate donations to the American Heart Foundation or the British Heart Foundation.

Paul Junior King, 41, of Houston passed away Sunday, March 15, 2020 while enjoying one of his favorite pastimes, cycling. Paul was born June 3, 1978 in London, England to Paul Arthur King and Edwina Attard King. He is survived by his parents;... View Obituary & Service Information

The family of Paul Junior King created this Life Tributes page to make it easy to share your memories.

Send flowers to the King family.