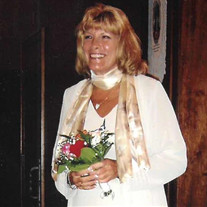 Paula Gayle Cheek Baltera, 67, of Houston Texas passed away Tuesday, August 20, 2019. Paula was born November 15, 1951 in Abbeville Louisiana to Edwin Cheek and Paula Broussard Cheek. She is preceeded in death by her beloved youngest brother William Cheek. She is survived by her husband Richard Baltera, of 23 years, brother Peter Cheek, sisters Patricia Duhon and Loretta Broussard, and numerous cousins, nieces, and nephews and friends. Paula grew up in Kaplan Louisiana where she attended Maltrait Memorial Catholic Grammar School. Paula Graduated from Kaplan High School where she played basketball. Paula cam to Houston in 1978 and worked many jobs including leasing agent for apartments and hostess for Tony Mandolas. Sometimes working as many as three jobs at once. She then moved to the insurance industry. Richard and Paula met in 1996 while Paula was working for John Alden Insurance. After John Alden, Paula worked for New Era Insurance. Finally ending her career at Copeland Insurance where she was Director of Marketing for Houston. Paula was instrumental in raising Richard's Daughter Kate when she came to live with them after Kate's mothers death. Paula enjoyed traveling on company trips with Richard including London, Paris, Venice, Istanbul and Ephesus. Paula enjoyed gardening and cooking. She was expert at Cajun recipes handed down from her family and many other cuisines including Mexican, Italian, and traditional American. Paula was also volunteered to answer the phone for "P.T. Cajun Bandstand" on WKPFT where she took requests. Paula's greatest passion were her dogs which through the years she had many. The last two being jack Russell Terriers named Jack and Jane, which she walked every day in the neighborhood. It not being too long before she knew all the other dog walkers and neighbors. Paula was a very outgoing person. She could walk in a room and know everybody's story very quickly. Paula was a member of St. Cecelia Catholic Church and for a number of years was part of the Eucharistic Adoration Group. Spending an hour each week in the chapel. Paula liked to pray the rosary and enjoyed singing Hymns at Mass. A Funeral Mass will be celebrated Thursday, August 29th, 2019 at 10:00 AM at St. Cecelia Catholic Church, 11720 Joan of Arc Dr., Houston, TX 77024, with reception to immediately follow on church grounds.

The family of Paula Cheek Baltera created this Life Tributes page to make it easy to share your memories.

Send flowers to the Baltera family.