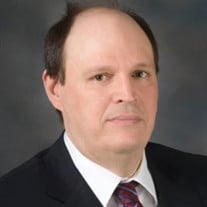 Dr. Peter Ruvolo, age 59, passed away May 12, 2021 after a long battle with adenoid cystic carcinoma. He was an associate professor in the Leukemia Department at the University of Texas MD Anderson Cancer Center. He will always be admired for... View Obituary & Service Information

The family of Peter Ruvolo created this Life Tributes page to make it easy to share your memories.

Send flowers to the Ruvolo family.