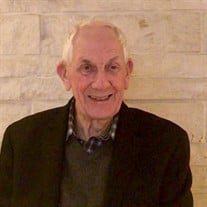 Petrus Maria Overschie “Piet”, age 91, died on September 8, 2018 in Houston, after a short illness. A memorial service will be held on Sunday, September 16, 2018 at 2:00 PM at Dettling Funeral Home 14094 Memorial Drive, Houston, TX 77079. The family will greet guests after the service in the Grand Room at Dettling. Piet was born on September 15, 1926 in Delft, the Netherlands. He was raised in a boisterous family of seven children. He attended nautical college in Rotterdam and graduated in 1946. He took his first position with Shell Oil as a tanker crew member. Over the years, he held many ship-board positions, eventually being promoted to Captain. He then transitioned to shore-side work as a Marine Services Manager. While working overseas for Shell, he met Yvonne Bal in Qatar. They married in The Hague on August 9, 1969. Their first home was in Oman, where they welcomed daughter Marianka. When she was still an infant, they relocated to suburban London where their second daughter Annette was born. Soon after, they relocated again to Houston for a planned four-year posting with Shell. Four years turned into 19, and Piet retired from Shell in 1991 after 44 years with the company. Piet and Yvonne raised their daughters in Houston, and they remained in Houston after his retirement. Piet was known for his love of a delicious meal and a well-made cocktail (he was also known to make excellent margaritas). Over the years he was active in neighborhood gourmet groups and wine clubs. He was a longtime follower of Major League Baseball and fan of the Astros, and also a skilled sudoku-er. But most of all, Piet enjoyed exploring. He and Yvonne put many miles on the minivan over the years visiting the Santa Fe Opera, grandchildren in Iowa and Dallas, and Banff National Park in Canada, among others. Their road trips have taken them to every state in the lower 48. Remembering him with great love and gratitude are his Wife Yvonne (Bal) Overschie of Houston; daughters Marianka Pille & husband David of Des Moines, Iowa and Annette Wolf & husband Sander of Plano, Texas; grandchildren David and Nora Pille and Jasper Wolf, along with a large extended family. In addition to the customary remembrances please consider donations in Piet’s memory to the Houston Food Bank or a charitable organization of your choice.

The family of Petrus Maria Overschie created this Life Tributes page to make it easy to share your memories.

Send flowers to the Overschie family.