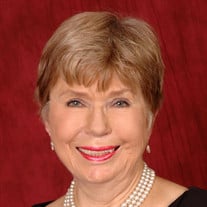 Phyllis Dayton Green was born in Orange, New Jersey, November 9, 1928, the second of three children to Ralph and Thelma Dayton. She attended school in New Jersey, graduating from Milburn High School, then studied fashion design at Traphagen School of Fashion. Her life took a different course after she married Arthur Jenkins on September 18, 1948 in New York City and started a family. Phyllis and Arthur had four children - Gwen, David, Susan, and Steven – before moving to Houston with Arthur’s job transfer. The family subsequently moved to New Orleans, Glendale, CA, and back to Houston, where Phyllis spent the remainder of her life. After divorcing Arthur in 1976 Phyllis worked in a day care center, then owned her own home organizing business. Eventually she was called to become a chemical dependency counselor, which she achieved by first getting her Bachelor’s degree at age 61. She went on to earn her Master’s degree 5 years later. She also found a new partner in marrying John Green, with whom she shared her love of learning and work in her chosen field. She spent the rest of her life working in the chemical dependency field, a career she loved and practiced until her death. Phyllis was a deeply spiritual person and a life-long learner, always reading, studying, attending workshops and conferences, and leading or participating in groups of various kinds, both professionally and as a volunteer. Phyllis’s spiritual exploration included many years in the Unity Church, as a long-time student of The Course in Miracles, as an avid student of the Jesus Seminar (Westar Institute), and in recent years a member of the Ordinary Life group at St. Paul’s Methodist. Her life was one of service to others, starting with raising her four children, then working in the field of substance abuse, including eighteen years of volunteer work at Turning Point Center, a residential and rehabilitative community for homeless adults age 50+. She was a natural teacher and nurturer and a mentor to many. She was also a very creative and artistic person, as demonstrated through her skill in visual arts and seamstress work. Phyllis is remembered as a loving and inspirational mother, grandmother, great grandmother, and aunt and as a good and loving friend to many. Phyllis was preceded in death by her brother, Norman Dayton; children, Steven, Gwen, and Susan; and grandson, Morgan King. She is survived by her brother, Robert Dayton; sister-in-law, Marge; her son, David Jenkins; daughter-in-law, Elizabeth; son-in-law, Randy Dayton; grandchildren Elizabeth Wolden and Anthony Teson, and several nieces and nephews. A Memorial Service celebrating Phyllis’s life will be held on Sunday, April 15th, 2018 at 1:00 pm at Dettling Funeral Home, 14094 Memorial Dr., Houston, TX 77079. In lieu of flowers please consider donations in Phyllis’s memory to the Turning Point Center, or the animal rescue organization of your choice.

The family of Phyllis Dayton Green created this Life Tributes page to make it easy to share your memories.