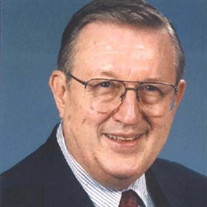 Raymond Paul Vigneault, 91, passed away on Friday September 24th, 2021 after a long battle with COPD. He was born on April 6, 1930 in Northhampton, MA, the son of Raymond William and Josephine Haczynski Vigneault. Educated at Amherst College (BA 1950) and University of New Hampshire (MS 1952). Served in the US Army 1953-1955. Employed by various Exxon Corporation affiliates over a thirty year career, retiring from EXXON, USA in 1982. He is survived by his wife of 43 years Joene Harris Vigneault, daughter Gabrielle Vigneault Taylor, son Guy Raymond Vigneault (Michelle), grandchildren Tracey Taylor Nash (Adam), Raymond D Vigneault, Riley N Vigneault and great granddaughter Jordan Grace Nash. Brother in law Marvin L. Hoovis MD of Centerville, MA along with his four daughters and one son. Brother in law Bruce Harris (Helen) of LA Grange, TX and Former Son in law Jerry Taylor (Taylor) of Rockwall, TX. He was predeceased by his parents, his beloved sister Beverly Hoovis, and his former wife, Gabby and Guy’s mother, Margaret (Peggy) Vigneault. After leaving the oil business, Ray taught Chemistry in the Spring Branch ISD, principally at Stratford High School. Volunteer activities included service as a Loaned Executive to the United Way, Income Tax counseling with AARP, and of greatest duration, work with Houston Taping for the Blind as a reader of books and newspapers. He and Joene resided for 22 years at Parkway Place Retirement Community until declining health required moving to a private nursing facility just a few months ago. The long association with the Christian Body at both Bethel Church and Parkway Place Mr. Vigneault believed to be the principal blessings of his life because it led to a sanctifying relationship with the Lord and Savior, Jesus Christ in Whom resides his confidence of eternal life. There will be a Memorial Service at Parkway Place, 1321 Park Bayou Drive, Houston, TX 77077 on Friday, October 22, 2021 at 10:00 AM followed by private family graveside interment at VA National Cemetery. In lieu of flowers, any remembrances would be preferred to be sent to Buckner Parkway Place or Gideons International.

Raymond Paul Vigneault, 91, passed away on Friday September 24th, 2021 after a long battle with COPD. He was born on April 6, 1930 in Northhampton, MA, the son of Raymond William and Josephine Haczynski Vigneault. Educated at Amherst College... View Obituary & Service Information

The family of Raymond Paul Vigneault created this Life Tributes page to make it easy to share your memories.

Send flowers to the Vigneault family.