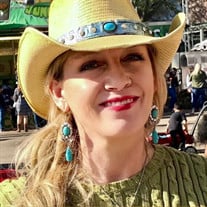 Rebecca Griffin “Becky” Gore, 54, of Katy, Texas departed this earth and was delivered into her savior’s care on August 22, 2020. She was born to Harold and Betty Griffin on July 21, 1966 in Ozark, Arkansas. Becky graduated from Northbrook High School in Houston, Texas in 1984 and received a Bachelor of Science from Sam Houston State University in 1987, where she was a member of the Kappa Delta Sorority. She was married to Sean Gore in 1994, and settled in Katy, Texas. Becky was preceded in death by her father and mother and more recently her uncles Willis Reese and Erwin Gross. Becky is survived by her husband Sean Gore and her two loving sons: Griffin and Caleb Gore, both of Katy, Texas. She is also survived by her two brothers, their wives and related nephews and nieces: Gerald and Jean Griffin of Georgetown, Texas and Brian and Pam Griffin of Katy, Texas, and nephews Garrett Griffin (Callie), Dallas Griffin (Lauren), Nicholas Griffin, Anthony Griffin, and niece Kristen McCutchen(Danny). She is also survived by her Uncle Nolan Kunkel(Deanie) and Aunts Clarice Gross and Joyce Reese, as well as cousins Kim Rodriguez(Rene), Gayle Emerson(Ted), Gary Gross(Kathy), Curtis Gross, Lisa McGinness(Jim), Cynthia Lesiuk(Joe), and Kimberly McKinney(Rick). Becky was a bright, ambitious, and loving soul who always sought to help others when she found them in need. Out of college, she pursued a career in commercial real estate and property management until the birth of her first son after which she dedicated herself to staying home and raising her family. In recent years, she found a passion in politics and volunteered in political campaigns together with championing those campaigns through social media. Through social media, Becky found another outlet to reach others in need and shared openly and often her love of Jesus Christ. As a result of current restrictions, a small private service will be held for Becky with family and close friends present. Those wishing to leave their condolences for the family may do so at www.DettlingFuneral.com

The family of Rebecca Griffin "Becky" Gore created this Life Tributes page to make it easy to share your memories.

Send flowers to the Gore family.