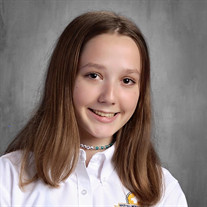 Regan Susannah Moger, 16, died as a result of a traffic accident in Atchison, Kansas on Monday, September 17, 2018. She was born at Methodist Hospital in Houston, Texas on March 22, 2002, and is preceded into the arms of Jesus by her mother, Tracey McEachern Moger. She is survived by her parents, Charles Steven Moger and Sandra Mullins Moger, her brother, John Alex Moger, and sisters Katherine Skye Moger and Stella Barbara Moger, step-brothers Kyle Christopher Meyers and Grant Anderson Meyers. As well as Grandparents, Barbara Ann Lane of Sandy, Utah, Ken and Dorothy Moger of Punta Gorda, Florida, and John and Josephine McEachern of South Yarmouth, Massachusetts. From her earliest days, when we called her Zuzu, Regan was a magical mix of light, laughter, and love. She had her mother’s generous heart and father’s flair for hijinks. Never one to sit idle, Regan’s boundless energy made her a blur of constant motion. She was a sprinkler head of life, dousing all who came near with her spirit of adventure and insatiable curiosity. Though she had love for many, her deepest love was reserved for her Grammy, her sisters, and brother, and, of course, her constant companion: big cow, a stuffed animal gift from her Uncle, Selwyn Lane when she was a toddler. Regan’s educational path started at Westside Montessori before attending John Paul II Catholic School through the eighth grade. Freshman and sophomore years of high school were spent at Houston’s Westside High School. In August of this year, she began school at Maur-Hill Mount Academy in Atchison, Kansas. Despite only being there for about a month, Regan quickly became a known brand among students and faculty—as she had at every previous school. Her weekly FaceTime calls were filled with accounts of volleyball games won and nearly won, new teachers, friends, and the fresh life she was building in Kansas. She had clearly found her tribe. It was a happy place for her. While we only had her with us for 16 years, they were years stuffed full of life. She lives on in our hearts until one day we are all reunited in paradise. Visitation will be held 6-9pm on Monday, September 24, 2018, at the Ars Chapel, St. John Vianney Catholic Church, 625 Nottingham Oaks Trail, Houston, TX 77079. Vigil service and Rosary will be offered at 7pm. Funeral Mass for Regan will be at 10:30am on Tuesday, September 25, 2018, at St. John Vianney Catholic Church, 625 Nottingham Oaks Trail, Houston, TX 77079 followed by a reception in the Community Center. 1:30pm burial will follow at Forest Park Cemetery, 12800 Westheimer Rd, Houston, TX 77077.

Regan Susannah Moger, 16, died as a result of a traffic accident in Atchison, Kansas on Monday, September 17, 2018. She was born at Methodist Hospital in Houston, Texas on March 22, 2002, and is preceded into the arms of Jesus by her mother,... View Obituary & Service Information

The family of Regan Susannah Moger created this Life Tributes page to make it easy to share your memories.

Regan Susannah Moger, 16, died as a result of a traffic accident...

Send flowers to the Moger family.