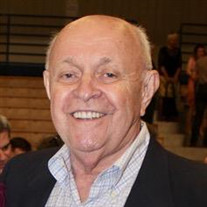 Richard George “Dick” Bautch, 80, of Houston, TX passed unexpectedly at home on Monday, May 4, 2020. Dick was born November 21, 1939 in Wabasha, MN to the late Adolph L. and Evelyn (Urnes) Bautch of Independence, WI. The eldest of six children, he was raised in Nelson, WI, and graduated from Alma High School in 1957. Dick played basketball and baseball at Wisconsin State College at Eau Claire and graduated from the University of Wisconsin Madison in 1962 with a Bachelors of Civil Engineering. He later obtained an MBA from the University of San Francisco in 1971. Dick began his career in 1962 as an engineer in the refineries of the Standard Oil Company (now Chevron Oil Corporation) in Richmond, CA, and retired from his 32-year career at Chevron in Houston as an executive of Crude Oil Marketing and Trading. Dick married Deborah Sidwell in 1964 (later divorced) and had four children. Following his retirement, he earned a Certified Financial Planner (CFP) certification and worked part-time as a Property Appraisal Review Board Member for Harris County in Houston. Throughout his life, Dick had many interests. He built many functional pieces of furniture and also fun things for his children during his woodworking phase. While living in Moraga, CA, he camped in Yosemite, skied in Tahoe and explored the rugged Northern California coast with kids in tow. Upon being transferred to Houston, TX, Dick would take refuge from the heat and humidity by hiking in the Rocky Mountains, which included a 14,000 ft trek up Long’s Peak. Later in life Dick took up cooking (Italian dishes were his specialty) and began participating in the local 4th of July parade with one of his two 1930’s Packards. He travelled overseas several times and was thrilled to see his mother’s homeland of Norway on his most recent excursion last summer. Dick put his engineering and woodworking skills to use as he served with his church on mission trips, which included Habitat for Humanity. He also spent many years mentoring at-risk youth at a local high school as well as through the SWAP program at his church. Dick particularly enjoyed the friendship and comradery of his Wilchester neighbors, Chapelwood Sunday school group, and fellow athletes at the Glazier Community Center Boot Camp. He will be missed. Dick was preceded in death by his parents and siblings Suzanne (Bautch) Koscielecki, Barbara (Bautch) Hartman, and Robert Bautch. He is survived by his children Cathy (Keary) Castleberry of San Antonio, TX; Jimmy Bautch of Houston, TX; Dan (Suzanne) Bautch of Austin, TX; Karen (Jason) Hardin of Oakwood, TX; and nine grandchildren Christy, Kyle, and Katie Castleberry; Jackson, Ava, Austin, and Reid Bautch; Lindsey and Marshall Hardin. Dick is also survived by brothers David (Sonja) Bautch of Alma, WI; Thomas Bautch of Nelson, WI; and sister-in-law Susan (Terry) Bautch of Evanston, IL. Dick is interred at Chapelwood United Methodist Church where he was a long-time, active member. A memorial service will be held at 10:00 AM on Monday, August 3, 2020, in the sanctuary of Chapelwood United Methodist Church, 11140 Greenbay St., Houston, TX. Social distancing rules are in place at this time so all attendees will need to RSVP to be admitted to the service. To be added to the attendee list, please send your name and the names of anyone accompanying you to [email protected] by July 20, 2020. In addition, please wear a mask until you are seated inside the sanctuary. The family will announce the location of a reception honoring Dick after the service.

A memorial service will be held at 10:00 AM on Monday, August 3, 2020, in the sanctuary of Chapelwood United Methodist Church- Read More Below

Send flowers to the Bautch family.