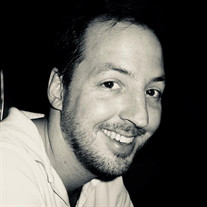 Richard Brian Edgerton, 49, of Houston passed away Friday, September 6, 2019. Richard was born February 25, 1970 in Houston, Texas to Terry and Dixie Edgerton. He is survived by his son Zachary Edgerton, his parents Terry and Dixie Edgerton, his sister Christine Edgerton Berry, his niece Emma Loo and nephews Joshua Loo, Jordan Loo and Joseph Berry and cousins Carolyn Cross, Angela Edgerton and Jay Edgerton. Richard grew up in Houston and attended Stratford High School. From an early age he was fascinated by electronics and how they worked. Every electronic game he had he quickly opened up to see inside what made it work. Unfortunately, it usually did not get put back together, but the discovery was the important part of the journey. His first computer was from Radio Shack, a TRS-80, in 1977 and his mind was engaged instantly and the passion for programming took flight. He worked side by side with his dad programming, developing platforms and excelled at solving complex computer problems. The phrase “Hey Rick my computer is not working” was a common phone call he would receive from family and friends – and he was your guy that could fix any issue. Programming and computers came easy for Richard, he was analytical and able to identify solutions quickly and enjoyed helping his dad and others. It is definitely a family thing as his son Zach is following in his footsteps. Richard enjoyed cars, computers and people. Cars, he loved cars. Much like computers, cars were something he could look inside and figure out what made them run or run faster. He even rebuilt an engine with his dad and friends in the family’s den. Quite the task, but what guy would not love to take on that challenge and drive his mom crazy at the same time. People were always drawn to Richard. His kind spirit, calming nature, and selflessness was easy to see in him and he shared it freely. He was incredibly intelligent and shared his knowledge to help his friends and family. If you needed a friend to count-on he was that friend. He listened well, did not judge and would do whatever he could to help anyone. And he loved and gave it all. He loved being a dad and his son Zach is his treasure and joy of his whole life. He loved his family and his many friends from all circles of his life. This world lost an incredible soul that touched many. A visitation will be held Saturday, September 28th, 2019 from 1:00-3:00 PM at Dettling Funeral Home, 14094 Memorial Dr., Houston, TX 77079. Visit www.DettlingFuneral.com to send flowers and leave words of condolence for the family.

The family of Richard Brian Edgerton created this Life Tributes page to make it easy to share your memories.

Send flowers to the Edgerton family.