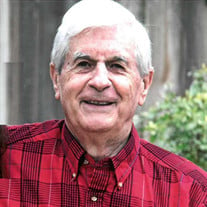 On October 30, 2018, Richard “Dick” Major passed away unexpectedly at the age of 86. Dick was born in The Bronx NY and grew up in White Plains NY. In 1954, he graduated Dartmouth University and subsequently joined the Airforce until 1959 as a lieutenant and navigator. Dick was stationed at Ellington Field during cadet training, where he met the love of his life, Annabell (Ann) Culley and made his home in Houston. After retirement from the Air Force, Dick began and advanced his career at the forefront of computer technology working for several major companies including Honeywell, Xerox and Nixdorf. As a child Dick enjoyed building model airplanes in his workshop under the cellar stairs, which was a prelude to his love of flying as an adult. He joined the US Air Force from 1954 to 1959. He loved flying and co-owned and Cessna airplane, one of his many “toys”. He enjoyed watching as well as playing the sport of the season; however, his favorite was baseball. After college, before he joined the Air Force, he played for the Philadelphia Phillies farm team. He was elated to see the Astros win the World Series last year. To his surprise while playing football in High School he was dubbed the nickname “SSSLSM”, shocking shoulders, sexy legs, scrumptious man. He was a natural athlete and managed to play many sports even into his later years. The most important lessons he learned in life came from his experiences as a Boy Scout, his faith, and the values his parents instilled in him. This made him a man of integrity and honor. He hoped that he “set a good example for his children and their children to use as a guidepost to make wise choices in their lives”. Dick had a very witty. He loved to tell stories and jokes. Some of the best moments in his life were during Thanksgiving and Christmas. The gathering of the family and reminiscing of life’s events were very special to him. He once was asked what he loved most about Ann, and he responded, “What don’t I love best? Our marriage has endured because we both treat each other with respect. We are all that is required to go through our lives to live together for a long- lasting relationship ‘til death do us part.” They definitely had a love story that most people do not have the privilege of experiencing. In 2014, when asked to the greatest gift he could receive, he responded, “I feel that I have already received my most wonderful gift. The gift is a loving wife, three beautiful daughters, six super grandchildren, and one great grandchild with hopefully more to come. The fact that they all, but two, live in the greater Houston area makes it even better since we get together often for family events.” Dick will be forever remembered by his loving wife, Ann, his 3 daughters, Karen Mace, Sharon Jenkins and Linda White, two sons- in- law, six grandchildren and four great grandchildren and his sister Elaine Snow. Visitation will be held at Dettling Funeral Home, 14094 Memorial Drive, Houston, TX 77079 on Sunday, November 4, 2018 from 2pm until 4pm. Service will be held on Monday, November 5, 2018 at 11am. Reception to follow.

On October 30, 2018, Richard &#8220;Dick&#8221; Major passed away unexpectedly at the age of 86. Dick was born in The Bronx NY and grew up in White Plains NY. In 1954, he graduated Dartmouth University and subsequently joined the Airforce until... View Obituary & Service Information

The family of Richard Major III created this Life Tributes page to make it easy to share your memories.

Send flowers to the Major family.