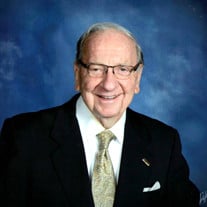 Robert A. Ashfield passed away Friday, November 23rd, 2018 in College Station, TX at the age of 85. Born October 16th, 1933, Bob grew up on a dairy farm in Chateaugay, New York, just a few miles from the Canadian border. He was deemed “college material” by his high school principal and subsequently attended the University of Albany, New York working his way through college and living with a local professor couple for the duration of his college years. He graduated with a Bachelor of Science degree in Chemistry and Mathematics in 1955. There he met Jane Egan on a blind date, and they married in 1956. Bob joined the U.S. Army prior to their wedding and was soon relocated to Middlesboro, Kentucky where he served in the Army Intelligence Division. In 1958, their first son, Robert A. Ashfield, Jr. was born. After release from the Army in 1959, he relocated back to Albany working for the State of New York Health Department as a chemist. Deciding to take on a different challenge, he interviewed with Shell Oil Company and accepted a marketing job, commencing a 32-year career whereby he, and his family, traversed the northern seaboard in a number of promotions and transfers. Bob was also involved in a number of civic organizations including the New York Junior Chamber of Conference, which he joined in 1959, and where he proudly served as President in 1964-65. In this capacity, he and his young family were constantly on the move as he delivered speeches across the state. After another Shell transfer to Baltimore, MD in 1965, their second son, Michael J. Ashfield, was born. Subsequently, the family moved to upstate New Jersey as he accepted a Shell position in New York City. In 1970, all of the New York -based oil companies moved their headquarters to Houston, TX and so did the Ashfields settling in what was at the time the far west side of Houston in the Memorial area. Bob accepted a position in managing the Procurement Division for Shell which he loved and built a spirited team of professionals interplaying hard work with fun and personal development. In 1992, he accepted early retirement, and immediately accepted a position with another chemical firm where he provided consulting expertise in leadership and personal motivation. During his time in Houston he was also active in local activities serving on the local subdivision board, the area Pool Association and was a long-time Little League baseball coach, winning several championships and coaching his son, Mike. In later years, he started two companies, Ashfield & Associates, a consulting firm, and Shellmark, Inc., which published the Shell Desk Diary. He also volunteered for SCORE, a local association devoted to helping entrepreneurs and new start-ups with experienced help from senior business professionals. Bob is preceded in death by his parents and his loving wife of 57 years, Jane Ashfield and is survived by his sons, Robert (Rock) A. Ashfield, Jr. of San Pedro, CA and his wife, Deborah; Mike Ashfield of College Station, TX and his wife, Carol (Barrett) and grandchildren Jackie (Barrett) McMillan and her husband Jeremy, Nathan Barrett and his wife Kelly, Jodi Barrett, and Tiffany Barrett; great grandchild Ellie McMillan; and brother Joseph Ashfield and his wife Mary Anne as well as other extended family and good friends. The Ashfield family will be present to receive friends Monday, December 3, 2018 from 6:00 PM until 8:00 PM with a Vigil Service beginning at 7:00 PM at Dettling Funeral Home, 14094 Memorial Drive, Houston, TX 77079. The Funeral Mass will commence Tuesday, December 4, 2018 at 10:30 AM at St. John Vianney Catholic Church, 625 Nottingham Oaks Trail, Houston, TX 77079. The Burial Ceremony, with Military Honors, will be at 1:00 PM at Houston National Cemetery, 10410 Veterans Memorial Dr., Houston, TX 77038. In lieu of flowers, the family requests you send donations to St. John Vianney Catholic Church (www.stjohnvianney.org) or The Association for Frontotemporal Degeneration (www.theaftd.org). Visit www.DettlingFuneral.com to leave on-line tributes.

Robert A. Ashfield passed away Friday, November 23rd, 2018 in College Station, TX at the age of 85. Born October 16th, 1933, Bob grew up on a dairy farm in Chateaugay, New York, just a few miles from the Canadian border. He was deemed &#8220;college... View Obituary & Service Information

The family of Robert Allen Ashfield Sr. created this Life Tributes page to make it easy to share your memories.

Send flowers to the Ashfield family.