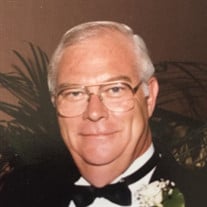 Robert Francis DeBesse, 89, of Houston passed away June 27, 2021. He was born on August 27, 1931 in Boston, Massachusetts to Joseph Francis DeBesse and Mary Hines DeBesse. He was preceded in death by his wife, Patricia DeBesse, after more than 62 years of marriage, and by his daughter, Laura DeBesse. He is survived by daughter Jean DeBesse Hoch and husband Roger, son Bob DeBesse and wife Janet, son David DeBesse, son Tom DeBesse and wife Linda. He is also survived by grandchildren Brittney (Kevin), Kaila (Laine), Cameron (Heather), Christine, Thomas, Megan, Sarah, Samantha and Brooke, and by great grandchildren Ash, Reese, Rori and Perry. He is also survived by many nieces and nephews. The second of three sons raised in Dorchester, Massachusetts, Bob graduated from Commerce High School and earned a degree from Boston University. After a stint in the Army, Bob found employment in Boston with the Shell Oil Company. At Shell, he met a fellow employee, Patricia Maureen Shutt, who would become Bob’s wife in 1957. The next decade saw Bob and Pat raise a growing family while frequently being transferred by Shell to new cities. In 1970, Bob and Pat and their five children moved a final time, to Houston. Bob’s success at Shell continued. Bob made many life-long friends at the company, who often spoke of his intelligence, uncanny memory, and of the impact that Bob had on them. He was an active and well-regarded parishioner and volunteer usher at St. John Vianney. He and Pat were great friends and benefactors to the Holy Name Retreat Center in Bunker Hill, where Bob was a one-time governing board member. They also supported the University of St. Thomas in Houston, Ave Maria University in Florida, Serra Club, Boston University, and many other organizations, and Bob volunteered as a teacher at a Houston area college and with such organizations as the Special Olympics. One of Bob’s favorite roles was serving as President of the Stratford Spartan Booster Club. And Bob was always supportive of his children in their endeavors. Like Pat, he was a cheerleader at all their activities. He championed his children quietly, letting them make their own decisions, but was always willing to mentor them with sage advice if asked. To his family, he was not only a father and grandfather and great-grandfather but also a loving and revered friend. And while Bob left Boston, Boston never left his heart. He remained a Boston Bruin and Red Sox fan his entire life, and fondly reminisced about his childhood. Yet despite his love for his city of birth, Houston became home for Bob, a home of which he was very proud. A home that must be just as proud of him. The family will be present to receive friends Monday, August 9, 2021 from 6-8 p.m. at Dettling Funeral Home, 14094 Memorial Drive, Houston, Texas 77079. The Funeral Mass will be held at 10:30 a.m. Tuesday, August 10, 2021 at St. John Vianney Catholic Church, 625 Nottingham Oaks Trail, Houston, Texas 77079. In lieu of flowers please consider a donation to the Holy Name Retreat Center in Bunker Hill or the University of St. Thomas in Houston.

Robert Francis DeBesse, 89, of Houston passed away June 27, 2021. He was born on August 27, 1931 in Boston, Massachusetts to Joseph Francis DeBesse and Mary Hines DeBesse. He was preceded in death by his wife, Patricia DeBesse, after more than... View Obituary & Service Information

The family of Robert Francis DeBesse created this Life Tributes page to make it easy to share your memories.

Send flowers to the DeBesse family.