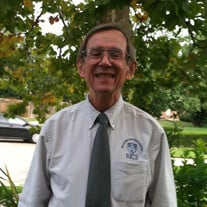 Robert Stephen Flumach, beloved husband, brother, father, grandfather, great-grandfather, and friend, went home to Jesus and Mary on Sunday, June 30th, 2019. Born in New York on November 28, 1941, he moved with his family to the Canal Zone, Republic of Panama, at the age of 9. As a young man, Bob served as an altar server at St. Mary’s Catholic Church in Balboa Panama and is fondly remembered by others who served with him in this capacity as the “gold standard” for altar servers in those days. His faith and his service to God and God’s people were of paramount importance to him, even in his youth. Bob also was a member of the Jr. R.O.T.C. program at Balboa High School, where he earned qualifications as an Expert Rifleman. His great passion for baseball began in his youth as well, a passion which he carried with him into his senior years as a pitcher and a manager during his years in the senior softball league in Houston. He lived to be on the field with the other ball players! After Bob graduated high school, he became an apprentice on the locks in the Panama Canal, where he spent many a night on the graveyard shift. Eventually, he became an electrician for the Panama Canal Commission. When he decided that he could not spend the rest of his life crawling around in hot attics as an electrician, he applied for and received a scholarship in 1969 to Texas A&M University, where he studied Electrical Engineering. After receiving his degree, he returned to Panama, where he was hired to work in the Engineering Department at the Administration Building in Balboa, Canal Zone. Bob retired from the Panama Canal Commission after 23 years of service and moved to San Antonio, Texas, and from there to Houston. The move to Houston came after he was hired at Rice University to be the Electrical Engineer at the Facilities Engineering and Planning Department in 1991. Robert retired from Rice University in 2013. He held both electrical engineering credentials and a Master Electricians License, which enabled him to serve the Rice University Community in a unique capacity until his death. Those who worked with and knew Bob in Panama, those who knew him in San Antonio, and those who worked with and knew him in Houston, held him in high esteem. He is known as a man of great faith, integrity, intelligence, kindness, and humility. He enjoyed sharing his knowledge with others and using his skills to assist and inspire them. He was a fantastic provider to his family over the years, both materially and spiritually. It was in Houston, while out square dancing, that he met his soulmate, Velma. Ever true to his faith beliefs, and inspired by the Holy Spirit, Bob guided Velma gently into the Catholic Church. Bob and Velma were then married on December 31, 2005, and they enjoyed a wonderful life together during their 13 1/2 years of marriage. The love and companionship that they shared was too short, but it was the best love and friendship of their lives. Bob was preceded in death by his father, Frank, his mother, Ada, and his elder sister, Betty. He is survived by his loving wife, Velma; his children, Elizabeth, Robert, Pamela, Catherine and Stephen and his devoted step-daughter, Cheryl; his grandchildren; his great-grandchildren; his surviving siblings, extended family, and his dear friends. Bob’s light lives on in his Church family of St. Elizabeth Ann Seton; in his softball family; and his Rice University family. He is much loved and already greatly missed. In lieu of flowers please consider contributions in Bob's memory to St. Jude Children's Hospital in Tennessee at www.stjude.org

The family of Robert Stephen Flumach created this Life Tributes page to make it easy to share your memories.

Send flowers to the Flumach family.