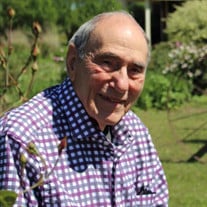 The Funeral Mass for Bob Hawthorne will be live streamed, Thursday, 1-6-2022 at 10:00 AM at this link: https://youtu.be/n9Pulrf3jEA Robert Judson Hawthorne, 93, of Houston passed away Wednesday, December 29, 2021 at his home, surrounded by his loving family. Bob was born March 14, 1928 in Houston to Ray and Rosalea Hawthorne. He is survived by his beloved wife of 69 years, Michelyn Giammalva Hawthorne; children Raylene, Josetta and Robert Hawthorne (Adi), Robbi Chiara (Matt); grandchildren Chris (Michelle), Steven, and Vinny Chiara (Amelia), Eric Harris, Laynna Burke (Josh); great grandchildren Claire, Gianna, Mary, Emily, and Gabriella Chiara, and River and Rhett Martinez. Bob attended Jeff Davis High School and graduated from the University of Houston. He served his country proudly in the US Army during the Korean Conflict. Early in his marriage Bob operated Silver Street Grocery in Houston’s Sixth Ward and worked in a variety of capacities until his retirement. He then served as a member of the Sacred Heart Society and as an usher at St. Michael’s Catholic Church. Bob was a selfless and compassionate man who exhibited kindness and goodness throughout his life. The Hawthorne family will be present to receive friends Thursday, January 6, 2022 from 9:00 AM until 10:00 AM with a Funeral Mass beginning at 10:00 AM at St. Michael the Archangel Catholic Church, 1801 Sage Rd., Houston, TX 77056. Mr. Hawthorne will be laid to rest with Military Honors in a private family ceremony at Forest Park Westheimer Cemetery. In lieu of flowers, please consider a contribution to Deep Waters Academy, a private non-profit Christian school founded by Bob’s grandson Vinny and his wife Amelia. See www.DeepWatersAcademy.org or mail to Deep Waters Academy , PO Box 591515, Houston, Texas 77259.

The Funeral Mass for Bob Hawthorne will be live streamed, Thursday, 1-6-2022 at 10:00 AM at this link: https://youtu.be/n9Pulrf3jEA Robert Judson Hawthorne, 93, of Houston passed away Wednesday, December 29, 2021 at his home, surrounded by... View Obituary & Service Information

The Funeral Mass for Bob Hawthorne will be live streamed, Thursday,...

Send flowers to the Hawthorne family.