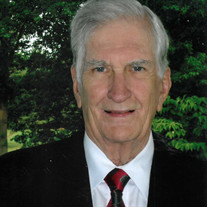 Our beloved husband, father, and grandfather, Robert A. Johnston Jr., passed away on May 31, 2017 after a long and brave struggle with dementia, Parkinson’s disease and lung cancer. Dr. Johnston was born on August 3, 1930 in Houston, Texas to Marie Louise Hogg and Dr. Robert A. Johnston. He was a decedent of Miss Ima Hogg of Houston whose legacy has enriched the lives of all Houstonians with her gifts of Memorial Park and her home, “Bayou Bend". Dr. Johnston, attended River Oaks Elementary School, and Kinkaid, but because of having life-threatening asthma, he left to attend Fountain Valley School in Colorado Springs, CO. Bobby thrived in Colorado playing football and hiking the mountains. He said that his life would never had been so full and rewarding had he not had such an opportunity. Dr. Johnston attended Princeton University, Class of ’52, and Baylor Medical School. He then attended Johns Hopkins Medical School (’54-’56) where he attained his MD. After an internship at Johns Hopkins Hospital, a residency at Stanford Lane Hospital, a fellowship in Endocrinology at Johns Hopkins Hospital, he returned to Houston and joined eight other physicians to found the Medical Clinic of Houston (MCH) in 1968, (known then as the Sunset Clinic). He had been a member of Allegro, the Houston Country Club, AMA, TMA, and other medical societies. Dr. Johnston retired from practice on June 30, 2000. Dr. Johnston was beloved by his patients, friends and family. Called “Bobby” by his family and friends and “Bobbo” by his grandchildren, he was so special to everyone. Even the nurses, caregivers, and aides at his final “home” said he was their favorite patient and that they were honored to have served him. Dr. Johnston was a sports fanatic. If he had the sports section in hand, he would read every line about each and every sport. Bobby had a fun sense of humor. He had special nicknames for everyone. His patients called him kind, compassionate, loving, sensitive to their needs, a gentle man. One patient wrote a note at his retirement. “You set an example of selfless service with the kindest heart and a twinkle in your eye. I literally thank God for you and all you have meant to our family”. Dr. Johnston was preceded in death by his parents, his sister Marie Jo Willoughby (Rodney), and his son Robert A. Johnston III. He is survived by his loving wife of 38 years, Nancy Burford Johnston, his son Thomas Marion Johnston and grandson Robert A. Johnston IV and granddaughter Julianna Marie Johnston, his daughter Sallie Johnston, and the mother of his children Carol Smith Johnston. He is also survived by three step-children, Samuel Timothy Needham, Jennifer Lynn Needham and Amy Lee Walker (Brooks), and five step grandchildren and his brother-in-law, Sam P. Burford (Ellen) of Dallas. We will love and miss him forever. Special thanks go to his doctor at the Medical Clinic of Houston, Dr. Christopher Finnela; his neurologist Dr. Jack Alpert; oncologist, Dr. Annie Su (MCH), and his radiologist Dr. Andrew Farach (Methodist); his doctors, nurses and aides at the Forum and Treemont Health Care Center, especially the administrator at Treemont, Sherion Shroeder, and the wonderful loving care of Alba Esmeralda Anduray, Berta Gomez, and Felicia Goodluck who provided such tremendous support and love until the end of his life. Thanks also to Texan Home Care, and Vantage Hospice. The memorial service for Dr. Johnston will be held on Thursday, June 15 at 2pm at St. Martin’s Episcopal Church, 717 Sage Road, Houston, Texas 77056, after a private family internment at Glenwood Cemetery. The officiants will be The Rev. Dr. Russell J. Levenson, Jr. and The Rev. Mary E. Wilson. Honorary pallbearers will be James A. Baker III, Wallace S. Wilson, Daniel C. Arnold, William K. Bruce, Robert L. Dabney,Jr., The Christmas Eve Lunch Group, and The Members of the Carl Estes Bridge group. In lieu of flowers please consider supporting: Amazing Place, 3735 Drexel Dr., Houston, TX 77027, Fountain Valley School, 6155 Fountain Valley School Rd., Colorado Springs, CO 80911, St. Martin’s Episcopal Church, 717 Sage Road, Houston, TX 77056, SPCA of Houston, 900 Portway Dr., Houston, TX 77024.

Our beloved husband, father, and grandfather, Robert A. Johnston Jr., passed away on May 31, 2017 after a long and brave struggle with dementia, Parkinson&#8217;s disease and lung cancer. Dr. Johnston was born on August 3, 1930 in Houston,... View Obituary & Service Information

The family of Dr. Robert Alexander Johnston Jr. created this Life Tributes page to make it easy to share your memories.

Our beloved husband, father, and grandfather, Robert A. Johnston...

Send flowers to the Johnston family.