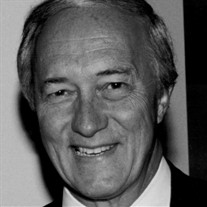 Robert Leroy Kietzman passed away on March 13, 2019 at the age of 85. Bob is survived by his wife of 63 years, Dolores, his children; Laura Lynn Dabbs of Kingwood, Texas; Robert Gordon Kietzman & wife Marla of Southlake, Texas; and Janice Marie Kramer & husband Doug of Longview, Texas. Seven grandchildren; Kristen Rooks & husband TJ, Lindsay Halliburton & husband Peter, Austin Dabbs, Anthony Kramer, Andrew Kietzman, Alexander Kietzman, Michael Kietzman, and great grandson Carter Halliburton. Bob was born in Iola, Kansas, in the middle of the Great Depression – October 7, 1933. Bob’s family moved to Dewey, Oklahoma, in 1940 where he graduated from high school in 1951. He enrolled at Oklahoma A&M College (now Oklahoma State University) and received a Bachelor of Science degree in Industrial Engineering and Management in 1955. Bob was active in both social and honors societies in high school and college and was listed in Who’s Who in American Colleges and Universities, and a Distinguished Military Graduate. Bob served as an officer in the U. S. Army for 8 years during the “Cold War" on Active Duty, Active and Inactive Reserve, receiving his discharge as a Captain. While at college, he met and fell in love with a beautiful coed, Dolores Mae Gordon of Oklahoma City. They were married on February 10, 1956, and immediately drove to Ohio where he was employed with The Cooper-Bessemer Corporation (the fore-runner of Cooper Industries) as a sales engineer. He became Vice President – International Operations with responsibility for all company activities outside of North America. The family moved to Houston in 1969 and with a business partner in 1970, he formed and served as President of North American Turbine Corporation. In 1976, the company ultimately became part of Dresser Industries. In 1977, he was a founder and President of Enserve, Inc., a privately held company with manufacturing operations in Texas, Oklahoma and Arkansas. He continued in that capacity until retiring from the company in 1996. After retirement he was active as a consultant, helping privately held companies with strategic planning and divestiture and later served as a full-time consultant to a European gas turbine manufacturer. Bob was a private pilot with multi-engine and instrument ratings and owned several single engine and multi-engine aircraft for business and pleasure. He was a proud member of Ye Ancient and Secrete Order of Quiet Birdmen, he served in several officer positions locally and nationally including that of Governor and Chairman of the Executive Committee. Bob sailed his yacht on Lake Travis for over 30 years, one of his greatest pleasures. He was an avid reader, loved to travel and was a talented furniture craftsman. He was active on the church council, a Grand Jury member and foreman and enjoyed golf, tennis and researching family history and genealogy. Bob was very proud of his grandchildren and their parents, that he was part of this family represents his finest and most important achievement. The family would like to thank Juan Olivero Sr., MD with Houston Kidney Consultants who was Bob’s doctor and became his friend. Clement A. DeFelice Jr., MD with Interventional Cardiology Associates, the wonderful staff at both Oasis Hospice and Caring Senior Service of Houston North. A special thank you to Amber Lopez his care giver who has become part of the family. A Funeral Mass will be held at St. John Vianney Catholic Church, 625 Nottingham Oaks Trail, Houston, TX 77079 on Friday, March 22, 2019 at 10:30 am. Interment will follow at Memorial Oaks Cemetery. In lieu of flowers please consider contributions in Bob’s memory to the Wounded Warriors Project.

Robert Leroy Kietzman passed away on March 13, 2019 at the age of 85. Bob is survived by his wife of 63 years, Dolores, his children; Laura Lynn Dabbs of Kingwood, Texas; Robert Gordon Kietzman & wife Marla of Southlake, Texas; and Janice Marie... View Obituary & Service Information

The family of Robert Leroy Kietzman created this Life Tributes page to make it easy to share your memories.