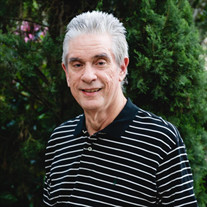 Robert John Panaccione, 61, of Houston, Texas, passed away on October 25th, 2020, following a difficult battle with cancer. Bob was born in New Jersey to the late John and Joan Panaccione and spent his adolescent years in Greenville, South Carolina, where he made forever friends. He graduated from the University of South Carolina and was a lifelong Gamecock. Bob started his accounting career in Houston, Texas, where he worked with his future wife Genie, and later received his MBA. Bob was an avid sports fan with a passion for golf, baseball, and football. He spent numerous hours coaching his daughters’ soccer, softball, and basketball teams. Bob enjoyed traveling with his family to Disney World, New York City, Panaccioni Village, Italy (his father’s birthplace), and to his second home in Seabrook Island, South Carolina. He loved music and movies and cultivated this passion with his daughters. Bob looked forward to his family traditions including July 4th parades and New Year’s Eve parties at Seabrook, holiday family reunions in the Northeast, Thanksgiving Turkey Trots, and Christmas Eve toasts in Houston with his family. He enjoyed hosting friends and neighbors at his home and took pride in his beautiful yard which was designed to resemble Tuscany. Bob worked tirelessly to hang Christmas lights for many years for his family. He is survived by his wife of thirty-five years, Genie, his daughter Camille and son-in-law Nathan Lozeron and their son John, his daughter Kaitlin and her fiancé Brandon Poston, his sisters Judy, Linda, Patty, and his close cousin Marie and their families. One of his greatest joys in life was taking care of his infant grandson John, who was named after Bob’s father. Bob was affectionately known as the “Baby Whisperer” and for providing daily joys, guidance, and a listening ear to all. Bob Panaccione’s exemplary life will be remembered for his devotion to his family and friends, particularly his daughters Camille and Kaitlin. Memorial Gifts may be made in Bob’s name to St. Christopher Camp at Seabrook Island, https://stchristopher.org/ or the charity of your choice. Bob will be laid to rest in South Carolina with a family and friends service. A Celebration of Life Drop-In with Social Distancing event will be held Sunday, November 8, 2020 from 1:00 PM until 4:00 PM at Pine Forest Country Club, 18003 Clay Road, Houston, TX 77084.

Robert John Panaccione, 61, of Houston, Texas, passed away on October 25th, 2020, following a difficult battle with cancer. Bob was born in New Jersey to the late John and Joan Panaccione and spent his adolescent years in Greenville, South Carolina,... View Obituary & Service Information

The family of Robert John Panaccione created this Life Tributes page to make it easy to share your memories.

Robert John Panaccione, 61, of Houston, Texas, passed away on...

Send flowers to the Panaccione family.