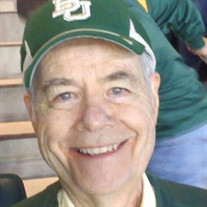 Our beloved Bob passed away Friday, October 15, 2021 at the age of 86 from complications of COVID. He was born in Waco, Texas, to Artymae Keitt Scott and John Robert Scott in 1935. He grew up in Hubbard Texas, and graduated from Hubbard High School. He then spent four wonderful years at Baylor University, majoring in finance and graduating in 1957. His friends from those four years became a lifelong blessing in his life and in that of his family. He met Elizabeth Embry in Premont, Texas, and they were married four years later in 1962 while he was working as a bank examiner for the Federal Reserve. In 1964 they moved from Dallas to the Clear Lake area of Houston where he started his commercial banking career with Nassau Bay National Bank. This was an exciting time to live across the street from the Space Center and a wonderful place to rear their three sons. Bob was an integral force in the growth of the community surrounding NASA, and was involved in too many community organizations to mention. He continued as president of Nassau Bay National Bank as it morphed through several manifestations, eventually becoming part of Bank of America . His last position was as one of the two district directors overseeing all the bank branches in the Houston metropolitan area. The joy of his life was his family, especially his “bride” of fifty nine years, Elizabeth. Other survivors include his three sons: Elliott Scott of Houston; David Scott and wife, Kamela, of Jacksonville Beach, Florida; and John Scott of Nassau Bay, Texas. And then there are the cherished grandchildren: Nicolas, Isaac, Hannah, Sam, Maryallie, Judith, and Jacob. There are simply too many wonderful friends to mention. A memorial service will be held on Saturday, October 23, at 10:30 at Lifepath Church, 17703 West Little York, Houston 77084 .It may be that the service will also be live streamed. In lieu of flowers Bob would have appreciated donations to Lifepath Church at the aforementioned address. Masks are not required but are recommended.

Our beloved Bob passed away Friday, October 15, 2021 at the age of 86 from complications of COVID. He was born in Waco, Texas, to Artymae Keitt Scott and John Robert Scott in 1935. He grew up in Hubbard Texas, and graduated from Hubbard High... View Obituary & Service Information

The family of Robert Keitt "Bob" Scott created this Life Tributes page to make it easy to share your memories.

Send comfort and support when it's needed most.