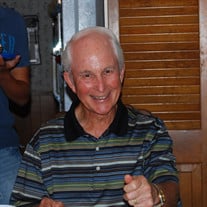 Robert Alfred (Bob) Shetler, 90, of Houston passed away Wednesday, January 10, 2018. Bob was born August 14, 1927 in Chicago, Illinois to Stanley and Cora Shelter. He is survived by his wife of 64 years, Lillian A. (Lill) Shetler; children, David Shetler & wife Debi, Linda Petticrew & husband Paul, Kathy Pfohl & husband Chris; grandchildren, Ryan Shetler, Garrett Petticrew, Michael Pfohl, Rachel Petticrew, Natalie Pfohl Anicito & husband Mike; great granddaughters, Abrielle, Aurora, and Rowan; sister-in-law, Margaret Congreve as well as numerous nieces, nephews and extended family. Bob grew up in the Chicago area. He earned his Bachelor of Science in Chemical Engineering from the University of Michigan. Mr. Shetler also served his country in the US Army for 2 years. He married the love of his life, Lill, June 20, 1953. Bob started his career as a Chemical Engineer and then in 18971 started a new career working in the Financial Services industry for most of his career as a Director of Financial Planning in such prestigious firms as Equitable (AXA). The Shetler’s moved their family to Houston in 1968 where they remained and raised their family. Bob was a very active man; he worked out every day, played golf twice a week and spent much of his free time serving with Men In Action and Bridgebuilding at MDUMC. He was a longtime member of the Exchange Club and Memorial Drive United Methodist Church. His family and friends knew him as a great husband, father, grandfather, great-grandfather and friend. He was loved by those who knew him and will be greatly missed. The family would like to thank the TARTS, Poker Group, Golf Group and the NF friends for always being there for the family. The Shetler family welcomes friends Sunday, January 14, 2018 from 3:00 PM until 5:00 PM at Dettling Funeral Home, 14094 Memorial Dr., Houston, TX 77079. A Memorial Service Celebrating Bob’s life will be held Monday, January 15, 2018 at 2:00 PM at Memorial Drive United Methodist Church, 12955 Memorial Dr., Houston, TX 77079. A reception will follow services in Friendship Court on the church campus.

Robert Alfred (Bob) Shetler, 90, of Houston passed away Wednesday, January 10, 2018. Bob was born August 14, 1927 in Chicago, Illinois to Stanley and Cora Shelter. He is survived by his wife of 64 years, Lillian A. (Lill) Shetler; children,... View Obituary & Service Information

The family of Robert Alfred (Bob) Shetler created this Life Tributes page to make it easy to share your memories.

Send flowers to the Shetler family.