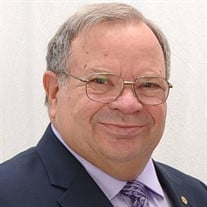 Robert Shindler, Jr., 71, of Houston passed away Monday, October 26, 2020. He was born August 11, 1949 in Nacogdoches, Texas to Robert Conrad Shindler, Sr. and Ellen Barbara Magliolo Shindler. Robert is preceded in death by his parents, and his twin brother, Ronald Shindler. He is survived by his wife of 43 years, Judy Shindler; his son, Patrick Shindler & wife Amber; his grandchildren, Benjamin, Caleb and Adeline; stepmother, Janet Shindler as well as numerous cousins, nieces and nephews. Robert grew up in Corpus, Christi, Texas. He attended Carroll High School and Del Mar College, then went on to attend the University of Texas Austin and the University of Houston. Robert moved to Houston in the 1970’s when he married Judy. He had a long 25-year career with the City of Houston as a Plan Analyst Supervisor in the Planning Department. Robert was a sports enthusiast and enjoyed watching his Astros and Longhorns. He also enjoyed coaching girls’ softball in the Corpus Christi area. He enjoyed RVing and camping with Judy as well as caring for his roses. He also enjoyed serving as an Asst. Scout Master for Patrick’s scout troop. Robert was very active in his community where he sat on the Board of Directors of the Kingsbridge MUD, was a life member of the Houston Livestock Show and Rodeo, Rodeo Express Committee. Robert was an active member of Christ Memorial Lutheran Church where he was an usher and sat on the Leadership Board. Robert was laid to rest at Forest Park Westheimer Cemetery in a private family ceremony. A Memorial Service celebrating his life will be held on Saturday, November 14, 2020 at 1:00 PM at Christ Memorial Lutheran Church. The Memorial Service will be posted online at 6:00 PM at https://www.youtube.com/channel/UCOL0aSR7MolPehC2dIdQT2w/videos In lieu of flowers please consider memorial contributions in Robert’s name to Christ Memorial Lutheran Church, 14200 Memorial Drive, Houston, TX 77079. www.christmemorialhouston.church

Robert Shindler, Jr., 71, of Houston passed away Monday, October 26, 2020. He was born August 11, 1949 in Nacogdoches, Texas to Robert Conrad Shindler, Sr. and Ellen Barbara Magliolo Shindler. Robert is preceded in death by his parents, and... View Obituary & Service Information

The Memorial Service will also be posted Nov 14, 2020 at 6 PM here: https://www.youtube.com/channel/UCOL0aSR7MolPehC2dIdQT2w/videos

Send flowers to the Shindler family.