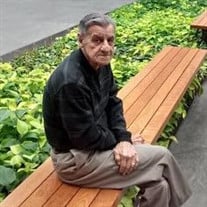 Rocco Daniel Marcoguiseppe, 78, of Houston passed away peacefully on Easter Sunday morning surrounded by his loving family. Mr. Marcoguiseppe was born in Cleveland, Ohio on June 20, 1938 to Martin and Caroline Marcoguiseppe. He is preceded in death by his parents and son Rick Marcoguiseppe and his brother John Marcoguiseppe. Rocco is survived by his wife of 39 years, Helena Marcoguiseppe; children, Robert Marcoguiseppe & wife Milisa, Ronald Marcoguiseppe & wife Chris, Cherie Enwright & husband Kevin; many grandchildren and great grandchildren. He is also survived by his brother, Martin Marcoguiseppe and sister, Marie Giles. Rocco had a generous nature, a genuine loving spirit and a quick smile. He loved to work hard and play hard; he enjoyed traveling the country and the world and was especially fond of visiting New Orleans and enjoying his time spent in French Quarter. For many years, it became the perfect “get away” with family and friends. As a young man, he served his country in the US Army fulfilling his duties with honor and privilege. Arriving in Houston in the 1980’s, he built a career and life as a general contractor and real estate investor. He was full of life to the very end, he made many friends along the way and will be truly missed by all. The Marcoguiseppe family will be present to receive friends Monday, April 24, 2017 from 6:00 PM until 8:00 PM at Dettling Funeral Home, 14094 Memorial Drive, Houston, TX 77079. The Funeral Mass will be celebrated Tuesday, April 25, 2017 at 10:30 AM at St. John Vianney Catholic Church, 625 Nottingham Oaks Trail, Houston, TX 77079. Mr. Marcoguiseppe will be laid to rest in Memorial Oaks Cemetery in a private family ceremony at a later date.

Rocco Daniel Marcoguiseppe, 78, of Houston passed away peacefully on Easter Sunday morning surrounded by his loving family. Mr. Marcoguiseppe was born in Cleveland, Ohio on June 20, 1938 to Martin and Caroline Marcoguiseppe. He is preceded... View Obituary & Service Information

The family of Rocco Daniel Marcoguiseppe created this Life Tributes page to make it easy to share your memories.

Send flowers to the Marcoguiseppe family.