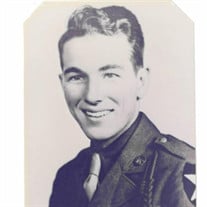 Rodric Morrogh Jr. 97, of Houston passed away Wednesday, January 27, 2021. Mr. Morrogh was born July 13, 1923 in Port Arthur, Texas to Rodric and Elizabeth Morrogh. He is preceded in death by his wife Frances Walker Morrogh and sister, Ruth Barrow. Rodric is survived by daughters, Marjorie Morrogh Morris and husband Gary, and Dorothy Diane Morrogh; grandchildren, Rebecca Morris Stegall and husband James, Daniel Morris and wife Jacinda, and David Morris and wife Laura; great grandchildren, Madeleine Stegall, James Stegall, Samuel Stegall; nephew, Alfred Sanders; sister, Jo Ann Ferguson; niece, Elizabeth Yzaguirre; nephew, Michael Barrow. Rodric grew up in the Port Arthur area. He joined the US Army 2nd Division, 9th Infantry, Company M when he was 16 years old and served proudly in the World War II European theater. He landed at Omaha Beach, Normandy on D-Day +1. He also fought in the Battle for Brest, Battle of the Bulge and Battle of Ramagen. On VE Day, May 8, 1945 he was in Czechoslovakia for their liberation. He was awarded the Bronze Star for his heroism. After the war Rodric met and married the love of his life, Frances on October 7, 1950 at Queen of Peace Catholic Church in Houston. Mr. Morrogh began his career in the Chemical industry as an operator for Shell Chemical in Deer Park, Texas. Afterwards, he and his family moved to San Antonio where here finished his career as a loss control inspector for Continental Insurance Company. Rodric was an avid golfer, keeping himself young by walking the 18 holes. He was also a health enthusiast before it was popular. His favorite snack was raw carrots and celery. In his final years he spent his time watching EWTN and the Golf Channel. He loved spending time with his family and friends. Rodric was loved by those who knew him and will be greatly missed. The Morrogh family will be present to receive friends Thursday, February 4, 2021 from 6:00 PM until 8:00 PM with a Rosary beginning at 7:00 PM at Dettling Funeral Home, 14094 Memorial Drive, Houston, TX 77079. The Funeral Mass celebrating Rodric’s life will take place Friday, February 5, 2021 at 10:30 AM at St. John Vianney Catholic Church, 625 Nottingham Oaks Trail, Houston, TX 77079. Mr. Morrogh will be laid to rest next to his wife at the VA Houston National Cemetery in a private ceremony. In lieu of flowers please consider contributions in Rodric’s memory to The Eternal Word Television Network, 5817 Old Leeds Rd., Irondale, AL 32521. Online donations can be made at EWTN.com.

The family of Rodric Morrogh Jr created this Life Tributes page to make it easy to share your memories.

Send flowers to the Morrogh family.