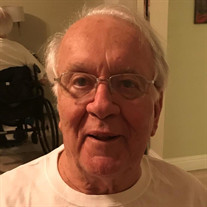 Roger Rolke, 80, of Houston passed away Saturday, November 28, 2020. Roger was born September 23, 1940 in Milwaukee, Wisconsin to Ralph and Ann Rolke. He is preceded in death by his parents and daughter Kristie Rolke Smith. Mr. Rolke is survived by his wife of 54 years, Judy; his son Bob Rolke and wife Ann; son-in-law, Mark Smith; and grandchildren Katherine Smith, Eva Rolke and Reed Smith. He is also survived by his sister Sally Burke as well as his nephews and extended family. Roger grew up in South Milwaukee. He attended The University of Wisconsin, where he received his Bachelor of Science. He then went on to Princeton University, where he earned his Masters and Ph.D. in Chemical Engineering. Mr. Rolke had an extensive professional career with Shell Oil. Roger’s career moved the family from California to Houston in 1971, then on to Louisiana until 1979, then back to Houston in 1986, where they remained for the rest of his career. Roger was generous and kind. Community service and volunteering were a big part of his life. He was a board member of the Executive Service Corps of Houston, was a supporter of YES Prep Public Schools, and was a volunteer chaplain at Memorial Hermann Memorial City Medical Center. He was a long-time member and an active volunteer at St. John Vianney Catholic Church. Roger was a private pilot who loved to travel. He also enjoyed live theater, music and dance, photography, gardening, reading, travel, and eating. He was curious and open-minded. He enjoyed learning and sought out new experiences, and made new friends all of his life. He was loved by those who knew him and will be greatly missed. Roger never let adversity stop him. He accepted what he could not change and forged ahead on his path. The Funeral Mass will be celebrated Friday, December 4, 2020, at 10:30 a.m. at St. John Vianney Catholic Church, 625 Nottingham Oaks Trail, Houston, TX 77079. In lieu of flowers donations in Roger’s memory may be made to Lungevity athttps://lungevity.org/for-supporters-advocates/support-our-work or Yes Prep Public Schools at https://www.yesprep.org/support-yes/ways-to-give The Streaming Link for Roger's Funeral Mass: https://youtu.be/9FjFqENgyGg

Roger Rolke, 80, of Houston passed away Saturday, November 28, 2020. Roger was born September 23, 1940 in Milwaukee, Wisconsin to Ralph and Ann Rolke. He is preceded in death by his parents and daughter Kristie Rolke Smith. Mr. Rolke is survived... View Obituary & Service Information

Send flowers to the Rolke family.