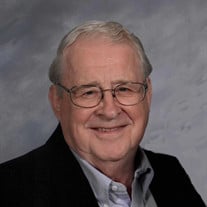 Ronald Michael Krainz, a beloved husband, a dedicated father, and a longtime executive in the plastics industry, died on October 10, 2017 in Houston, Texas. He was 81. The cause was from complications associated with Alzheimer’s disease. Ron was born on July 21, 1936, in Cleveland, Ohio. His father, Michael L. Krainz, was an electrical engineer; his mother, the former Alice F. Jezek, was a homemaker. Both parents were active in the Catholic Church and with the local Slovenian community. While growing up in Euclid, Ohio, Ron attended the nearby Holy Cross grammar school. He decided as a young boy to study for the priesthood so he entered the Eymard Preparatory Seminary in New York under the direction of the Blessed Sacrament Fathers. He graduated from high school in 1954 and earned an AA degree in 1956 all while in the seminary. That autumn, Ron entered the Blessed Sacrament Fathers Novitiate in Barre, Massachusetts, where he remained until he decided to terminate his studies for religious life in 1957. Upon his return to Ohio, Ron enrolled in John Carroll University where he earned a BS degree in chemistry. Ron’s cross–country career in plastics began shortly after graduation in 1961. After a brief stint as a research chemist with Addressograph-Multigraph Corporation of Euclid, Ohio, Ron was hired by Diamond Alkali Company’s Plastics Division to work in both technical services and sales. Eager for new challenges and warmer weather, Ron accepted a transfer from Ohio to Los Angeles to expand Diamond’s West Coast plastics market. Next Ron moved to Phoenix, Arizona, to work as an operations manager for Kerona Plastics, a medium–size pipe manufacturer. Realizing that he enjoyed sales far more than manufacturing, Ron, in 1970, joined Albis Corporation; a multinational company headquartered in Hamburg, Germany; to develop plastics sales in the western United States. Ron would stay with Albis for the next twenty–seven years. Using Southern California as his initial base, Ron sold various types of plastics throughout the region. He worked out of his home and traveled extensively visiting manufacturers and suppliers. He would occasionally take his sons along to various factories, a memory that they still fondly recall. Years later, his son John would follow his father to Albis, joining the company in 1986 as a salesman. Albis’ corporate leaders turned to Ron in 1975 to revitalize the American headquarters by promoting him to president. This promotion necessitated a move from the Los Angeles area to Houston, Texas. Upon his arrival in Houston, Ron quickly stabilized the American operations and within a year returned it to a profit–making organization. Albis’ reputation eventually grew to be a well–respected reseller of plastics. By the late 1980s, Ron began planning for a major expansion, the building and operating of a plastics compounding facility. The doors to the new plant, offices, and warehouse opened in Rosenberg, Texas, in 1990. The facilities in Rosenberg were soon expanded and would employ 179 people, with operations running twenty–four hours a day seven days a week. Under Ron’s leadership Albis had been dramatically transformed during his time there beginning in the mid–1970s until his retirement in 1997. After leaving Albis, Ron volunteered for over ten years providing free tax services for people in need and senior citizens. He is survived by his cherished wife of fifty–six years, Millie A. Yager, whom he married in 1961. They had met two years earlier when Ron’s mother suggested he call the daughter of a Slovenian friend. Ron and Millie enjoyed traveling together, visiting five continents and extensively exploring Europe through numerous trips. The highlight of their travels was reconnecting with their relatives in Slovenia. Together they were blessed with four wonderful children. Ron’s greatest joy was seeing his children, and more recently his grandchildren, become successful and caring individuals. He deeply enjoyed attending their various athletic events, musical shows, and theatrical performances. Ron’s sense of humor will be recalled by all and remained with him until the end. Ron is also survived by his sons Michael and his wife Elizabeth, John and his wife Jill, and Tom and his wife Laura Knotts; his daughter Nancy Camarillo and her husband Thomas; his treasured grandchildren Kevin, Justin (Amanda), Ryan, Anna, Wilma, Theresa, Anthony, and Robert; his cousins Marilyn Karpinski and Paul Karpinski; his sister–in–law Lou; his nephew Johnathan Paul (Katie); and his niece Krista (Rich) Sasak. He was preceded in death by both his parents and by his younger brother Paul. Ron will be remembered for his love toward Millie and his children, his business acumen and ethics, and his devotion and service to his family and God. In lieu of flowers, memorial donations may be made to the Congregation of the Blessed Sacrament, 5384 Wilson Mills Road, Cleveland, Ohio, 44143 or at http://blessedsacrament.com/.

Ronald Michael Krainz, a beloved husband, a dedicated father, and a longtime executive in the plastics industry, died on October 10, 2017 in Houston, Texas. He was 81. The cause was from complications associated with Alzheimer&#8217;s disease. Ron... View Obituary & Service Information

The family of Ronald Michael Krainz created this Life Tributes page to make it easy to share your memories.

Send flowers to the Krainz family.