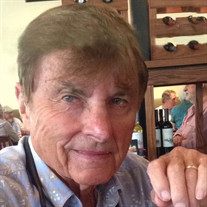 Ronald James Voorhees, 84, passed away on Wednesday, August 2, 2017. He came to this world as a gift to his family on the day before Mother’s Day: May 13, 1933. He is survived by his wife of 31 years Lucy Voorhees; sisters Darlene Voorhees and Marie Burns of Fresno, California; sons Ronald Michael Voorhees and Kristopher James Voorhees; daughter Charmaine Vanessa Voorhees; grandson Ross Voorhees; and granddaughter Ashley Voorhees. Ronald James Voorhees was born in Washington, D.C. to parents, Lillian Quinlist and Arthur Garfield Voorhees. His family often traveled between the west coast and Wyoming during the 1930s recession, introducing a young Ronald to the best of both worlds: the mountains and the sea. Ronald spent his formative years in Greybull, Wyoming and, as a young man, he enjoyed many different jobs, including shepherd and lifeguard, which demonstrated his abilities as a natural born leader. It was in Wyoming that he found his passion for rigbuilding. Ronald began his career as a young roughneck determined to prove himself by outworking those around him. Eventually, he built several of his own companies from the ground up. He was well respected in the oilfield community, and loved that his work allowed him to travel the world. Ronald considered one of his proudest achievements to be the Mega `Bungee, a bungee jumping platform modified from an old rig which stood 220 feet tall next to the Queen Mary in Long Beach, California. In addition to being an entrepreneur and inventor, Ronald proudly served his country in the United States Army during the Korean War. A serious yet soft-spoken man, Ronald measured his words carefully but spoke often of his love for his family and his work crew to others. Anyone who met Ronald was frequently reminded of his love for the outdoors. A traveler across the globe, he felt most at home alongside an ocean. Although he never believed in retirement, his ideal retirement plan would have been to live on an island. An independent, strong-willed spirit, Ronald will be missed dearly. His family is certain that Ronald has now found his perfect place in the sun. The Mass of Christian Burial will be held Thursday, August 10 , 2017 at 10:30 AM at St. John Vianney Catholic Church, 625 Nottingham Oaks Trail, Houston, TX 77079. In lieu of flowers, please consider contributions in Ronald’s memory to the Alzheimer’s Association at alz.org. Visit www.DettlingFuneral.com to leave words of condolence for the family.

Ronald James Voorhees, 84, passed away on Wednesday, August 2, 2017. He came to this world as a gift to his family on the day before Mother&#8217;s Day: May 13, 1933. He is survived by his wife of 31 years Lucy Voorhees; sisters Darlene Voorhees... View Obituary & Service Information

The family of Ronald James Voorhees created this Life Tributes page to make it easy to share your memories.

Send flowers to the Voorhees family.