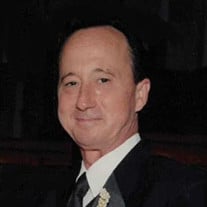 Ronald Lawrence Webster age 63, of Houston Texas entered this life on April 8th, 1955. He was the son of the late Richard F. Webster and Dorothy M. Webster. Ron was the youngest of 3 brothers. He was a native Houstonian who loved to fish, he was a jack of all trades, was very involved in sports with his children growing up and adored his family. Ron spent most of his career in the tile and construction industry in various positions. Most recently, Ron worked alongside his wife Theresa as her right-hand man in their Interior Design business. Ron had a good life and was adored by many. He had a way about him that was comforting to others and he always put others first. He had an opinion and suggestion for everything, whether you wanted to hear it or not. He has always lived life in his own way, right to the end. Ron passed away unexpectedly on September 7th, 2018. He will be greatly missed as a devoted Husband, Father, Grandfather, Brother, Uncle, Mentor and Friend. Ron is survived by his loving wife Theresa, daughter Cristal McSwain and husband Don, son Ronnie Webster and wife Rebecca and his three grandchildren Avery, Ashlyn and Tyler who he was so proud of; two brothers Richard Webster, Jr. and wife Deborah and Roger Webster; as well as several nieces, nephew and other relatives. He was preceded in death by his father Richard F. Webster and mother Dorothy M. Webster. A Memorial Service celebrating Ron’s life will be held Saturday, September 15th, 2018 at Dettling Funeral Home, 14094 Memorial Drive, Houston, TX 77079. Visitation to begin at noon, memorial service at 1pm and reception to immediately follow. In lieu of flowers, please consider donations in Ron’s memory to Recenter, a charity committed to aiding homeless men and women with addiction. Online donations accepted at www.recenterhouston.com

Ronald Lawrence Webster age 63, of Houston Texas entered this life on April 8th, 1955. He was the son of the late Richard F. Webster and Dorothy M. Webster. Ron was the youngest of 3 brothers. He was a native Houstonian who loved to fish,... View Obituary & Service Information

The family of Ronald Lawrence Webster created this Life Tributes page to make it easy to share your memories.

Send flowers to the Webster family.