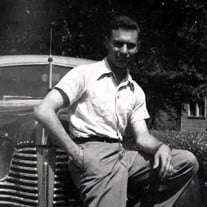 Ross Carle, 89, passed away recently of a brief illness at his home in Houston, Texas. He succeeds his wife of 50 years Ethel (Beth) Carle who passed away July, 2002. He leaves behind his children, Russell Carle, Robin Lynn Carle, and husband, Steve Balough; Randy Carle, and wife Laura; Karen C Chadwick and husband John, grandchildren Kristen, Lindsy, Kara, Emily, Michele and Erin and 3 great grandchildren, Sydney, Cayden and Coulter, in addition to his companion, Cookie Leisenring, as well as many friends. Born and raised in Woodbridge, New Jersey, Ross was the son of Ross and Rose Carletta. His father was a machinist and his mother a seamstress. Ross had a passion early on for music and played tenor guitar in a band called The Three Bells, before making the decision to pursue a career in electrical engineering. In doing so, back in the day, there were years of dedication on the part of both Ross and Ethel, as Ethel (an executive assistant at Palmolive Pete in NY worked) to put Ross through school - both bachelors and masters degrees – while raising four small children. As children, Ethel ("Edel") and Ross lived in the same neighborhood. At one time, she asked her Mom as they walked down the street, 'who is that boy and why is he in baby stroller?' Shortly after the two met and became close during high school. The young, attractive couple married early and quickly became an unbeatable team with dreams of a solid career and raising a family in Westfield, New Jersey. Ross completed his Bachelors Degree and Master Degree in Electrical Engineering, far exceeding his original plan. Ross was the first in his family to go to college, and earn a Master’s degree. Ross' first job after graduating was with NJ Power. Later he was employed for many years with Shell Oil in NY. In 1969, the difficult decision was made to move the family, including Ethel's mother, to Houston, where Ross would work for Bechtel Engineering, and Transco, later known as The Williams Company, designing power plants locally and oversees. Ross became an engineering manager and master planner in electrical design and quickly executed large scale projects on tight budgets, including plants in Deer Park and Saudi Arabia. Always a hard worker for his family, and because he enjoyed his work, he retired at the age of 70 to continue enjoyment of his passion for playing theatre organs, electric piano, tenor guitar and banjo. He also enjoyed theatre, all things science, astronomy, finance and travel. Ross was a man of high moral character and integrity. He married his childhood sweetheart, took his role of supporting his family very seriously, and showed great compassion and dedication through the care he provided his first born throughout life, and his mother in her later years. Ross is remembered by those who met him as congenial, caring, fun-loving, highly intelligent and articulate. After his wife's passing, his companion in recent years, Cookie, and he enjoyed several years together attending Texans' games, gatherings with friends, and celebrating life. Together Ross and Ethel shared an extraordinary life journey. Together once again, their spirits will remain in the hearts, minds and lives of those with whom they shared their lives, for which we are grateful. There will be a Memorial Service Saturday, December 9, 2017 at 4:00 PM Dettling Funeral Home 14094 Memorial Drive Houston, TX, US, 77079. Amen

Ross Carle, 89, passed away recently of a brief illness at his home in Houston, Texas. He succeeds his wife of 50 years Ethel (Beth) Carle who passed away July, 2002. He leaves behind his children, Russell Carle, Robin Lynn Carle, and husband,... View Obituary & Service Information

The family of Ross Carle created this Life Tributes page to make it easy to share your memories.

Ross Carle, 89, passed away recently of a brief illness at his...

Send flowers to the Carle family.