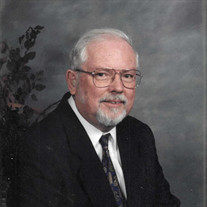 Royce Nolan Brown of Houston passed away November 20, 2020. Royce was born January 6, 1931 in Fredericksburg, Texas to Ann and Nolan Brown. He is preceded in death by his wife of 53 years, June Brown and his parents. He is survived by his children, Michael Brown, Eileen Brown Franklin, Jean Sedita and husband Richard, Jim Brown and wife Wendy, Sister, Betty Grinke and her husband Walton, grandchildren, Sarah Savard and husband Matt, Frank Sedita and wife Rachel and Andrew Franklin, great grandchildren, Logan Savard, Jackson Savard and Stella Sedita, also sister in law Joyce McClow as well as numerous nephews, nieces and loving friends. Royce grew up in Fredericksburg, attended Texas Lutheran College and graduated from University of Texas with a degree in Mechanical Engineering. He served in the US Army during the Korean war. After the service, he began working for Allis Chalmers in West Allis, Wisconsin. He also continued his education and earned his Masters Degree in Mechanical Engineering from University of Wisconsin at Madison. While he was in Wisconsin, he met the love of his life, June Duhamel and they were married in 1959. In 1966 Royce began employment with Dow Chemical and the family moved to Houston. He remained with Dow until his retirement. Following his retirement from Dow, Royce formed RNB Engineering in which he provided consulting services on a global basis. He also authored the textbook “Compressors: Selection and Sizing”. He was an active member of the American Petroleum Institute and was a Fellow of the ASME and ISA. Royce was a brilliant, humble, kind and caring man who enjoyed being around family. He entertained his children with his guitar, playing folk music, his favorite “Michael Row the Boat ashore” was a staple. For relaxation he enjoyed working on his farm in Gonzalez County Texas where he cared for his cattle and worked in his gardens. He was a long-time member of Memorial Drive Lutheran Church. The family would like to express their appreciation to the Amazing Grace Hospice. Due to COVID 19 restrictions we will not be hosting a memorial service, but please consider a charitable donation to The Houston Boy Choir in Royce’s name.

Royce Nolan Brown of Houston passed away November 20, 2020. Royce was born January 6, 1931 in Fredericksburg, Texas to Ann and Nolan Brown. He is preceded in death by his wife of 53 years, June Brown and his parents. He is survived by his... View Obituary & Service Information

The family of Royce Nolan Brown created this Life Tributes page to make it easy to share your memories.

Send flowers to the Brown family.