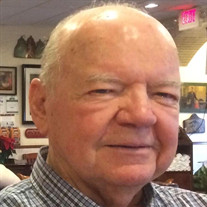 Russell Gerald Jones was born December 13, 1930 in Cedar Bayou, Texas to Lamar Washington and Dorothy Nell Jones. He is survived by his wife Janis Jones, his children Rusty Jones and Mark Shephard, Lauri and Chris Cragg, and his grandchildren Jessica and Kyle Dugan and Matthew Cragg. He is also survived by Janis’ children Mark and Nancy Patteson and Pam and Harry Purdom and grandchildren Doug Patteson, Amanda Patteson, Dean Patteson, Bradford Purdom, Kate Purdom and Hayley Purdom. Russell was preceded in death by his wife Mary K. Jones, his parents, and his sister Freda Clark. Russell was larger than life and twice as feisty. He doted on his family and loved his friends. He was happiest when he was telling stories to his friends and family. He was a self-made man who grew up like Huck Finn and never lost his love of the outdoors. He graduated from Texas A&M in 1956 and served in the Air Force and was very proud of both. He was an avid fisherman and loved the water. He was smart, funny and full of mischief and was always looking for new challenges and ways to improve his mind. He had a strong faith and undertook many religious studies at the church. He believed in helping others and helped to set up Friends and Family and was part of the AIDS team at Memorial Drive United Methodist Church and became a Stephen Minister at St. Peter’s Methodist Church when he lived in Katy. He had many interests – he loved to read, watch movies, musicals and nature documentaries, listen to country music and go to the opera. He loved the British television series Rumpole of the Bailey and got a big kick out of the fact that Rumpole referred to his wife as “she who must be obeyed”. One of his favorite television shows was NCIS. He was a big sports fan and loved the Texans and the Astros. His “Dr. Jones BBQ Sauce” remains a delicacy to this day. Russell remained active throughout his life, first in sports and later at the gym. When his children were very young, family vacations were trips to Colorado. When he moved from Midland to Houston, vacations were waterskiing trips to Inks Lake twice a summer, meeting up with several other families. He travelled the world when working. Later in life, he showed off some of his favorite places to the rest of the family on vacations. He loved Australia, Bermuda, the Canadian Rockies and the Tetons. Closer to home, he spent a lot of time in Galveston and liked to visit Chappell Hill and Washington on the Brazos on trips to see the wildflowers in the spring. He was able to cross a wish off his bucket list when we met up in Normandy, France to visit the D-Day beaches. After starting his career in oil and gas as a roughneck working for Tenneco in Big Lake, Texas, Russell’s mom told Mary K. not to even unpack out there because there must have been a mistake – Russell was a college grad, after all. He progressed from the field to the office, becoming one of the leaders in the risk management group. After many years with Tenneco, and then retired for the first of many times and moved to the sales side, developing and selling the insurance programs he used to purchase for Tenneco. He always said he should have done that many years before. A natural salesman, Russell was respected as a technical expert in developing complex risk mitigation strategies. Many have commented through the years that one should never fall for Russell’s “good old boy” demeanor as he was one of the best in the business. He continued the cycle of “work then retire” for many years following his career at Tenneco. Russell was fortunate to have been married to two wonderful women whom he loved and to whom he was completely devoted. Russell married Mary K. in 1952. After their mothers introduced them to each other, Russell and Mary K. had a long distance courtship while Russell was in the Air Force. Mary K. helped (actually insisted that) Russell graduate from TAMU. Following Mary K.’s passing, Russell finally got up the nerve to ask Janis Patteson out on a date. With a first date at the Houston Opera, the rest was history. Janis and Russell were happily married for 14 years and greatly enjoyed each other. A celebration of Russell’s life will be held Tuesday, April 2, 2019, at 11:00 at Memorial Drive United Methodist Church, 12955 Memorial Drive, Houston, TX, followed by a reception at the church. A private interment will be held at Memorial Oaks Cemetery. In lieu of flowers, donations may be made to the Texas Chapter of the Coastal Conservation Association CCA Texas, 6919 Portwest Dr., Suite 100, Houston, TX 77024, in memory of Russell Jones.

Russell Gerald Jones was born December 13, 1930 in Cedar Bayou, Texas to Lamar Washington and Dorothy Nell Jones. He is survived by his wife Janis Jones, his children Rusty Jones and Mark Shephard, Lauri and Chris Cragg, and his grandchildren... View Obituary & Service Information

The family of Russell Gerald Jones created this Life Tributes page to make it easy to share your memories.

Send flowers to the Jones family.