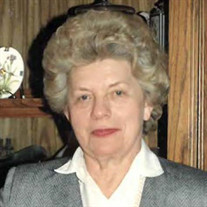 Ruth Elizabeth Bower Monse departed this life on February 23, 2016, in the presence of family. Ruth was born in Rose Valley, Pennsylvania, on May 30, 1925, the third of five children of Lawrence Bower and Pearl Heim Bower. She grew up on the family farm, which instilled a grit and work ethic that never waned. Both were on display from early on. After graduating from Montoursville High School at age 18, she moved to Washington, DC, to work for the Department of the Treasury during World War II. Other friends had also agreed to go, but even after they backed out at the last minute, she bravely went ahead alone. She later worked for Railway Express before stepping out of the workforce for 20 years to raise her children. In 1974, she returned to work, this time for Viking Associates Realty in Houston, where she was employed for more than 30 years, retiring when she was long past 80. In May of 1946, Ruth met Murray J. Monse, a Brooklyn-born GI who had just moved to Washington after his discharge from the Army. For decades afterward, Ruth and Murray told different stories about how they met. She said she saw him across the dining room at a local lunch spot. He said she tried to sell him nylons as he walked past the car in which she sat waiting for a friend. Not until the early 1990s did her family realize that Ruth and Murray were both right: They simply remembered different parts of the same day. On their first date, July 12, 1946, as they sat on the steps of the Lincoln Memorial, Murray told Ruth he was going to marry her. She laughed at him, to no avail. They were married in a church wedding in Pennsylvania exactly one year later. They enjoyed it so much they got married a second time, on July 14, before a small-town justice of the peace who packed a pistol. Their union endured until Murray’s death on February 18, 1995. Ruth and Murray tried for years to start a family, but were unsuccessful until they joyously welcomed son Mark in 1954, followed by Lisa, Michelle, Eric, and Jacqueline. As Murray was fond of saying, once they got started, it was hard to stop. The family lived in Silver Spring, MD, and then moved to Cincinnati, OH; Overland Park, KS; and finally Houston, TX, in 1970. The family occasionally traveled by air to visit the Pennsylvania relatives. On one such occasion, Ruth rang the flight attendant’s call button. The harried attendant finally responded, and apologized, explaining that she had been dealing with nine children on the flight. Ruth wryly replied, “Yes, I know, five of them are mine.” Despite having five children, Ruth was active in volunteer work such as the National Council of Jewish Women, Boy Scouts and Girl Scouts, and the PTAs of her children’s schools. Once she moved to Houston, Ruth discovered a love for growing roses, which she did with great passion and success for many years. At one time, she had more than 100 rose bushes growing in her Houston yard, which regularly stopped traffic with its lush displays. Ruth always loved animals, starting with a pet duck she had growing up in Pennsylvania, and extending to a menagerie assembled by her children. At its largest, the herd included two dogs, three cats, and a revolving roster of pet snakes.d The long-suffering Ruth even allowed Eric to keep frozen toads in the freezer for the snakes. Ruth was preceded in death by her parents, husband, sister Eleanor Bower Kepner (Rose Valley, PA), and brother John Bower (Montoursville, PA) and son-in-law Andrew Ritzell (Katy, TX). She is survived by her son Mark Monse of Coppell, TX; daughter Lisa and son-in-law Clinton Harman of Houston, TX; daughter Michelle Monse of Dallas, TX; son Eric Monse and his wife Lisa Jo, of Rosharon, TX; and daughter Jackie Monse Ritzell, of Katy, TX. Ruth was a devoted “Grammy” to her grandchildren: Kacey Harman Hahn and her husband Josh Hahn, of Pearland, TX; Paul Murray Harman of Houston, TX; David Monse of Coppell, TX; Caitlyn Monse of Denton, TX; and Alec Ritzell and Nicolas Ritzell, of Katy, TX. Ruth is also survived by her sisters Helen Bower Ulmer and Aletha Bower Wright. She was especially close to niece Shirley Kepner Oehrli and her husband Niles. In lieu of flowers, the family requests memorial donations to the Houston BARC Foundation, the Houston Arboretum & Nature Center, or the charity of your choice. The family would like to thank C & S Healthcare for their help in allowing Ruth to remain with her family in her later years. They also thank Dr. Phillip C. Haas for his many attentive years as her cardiologist. Finally, thanks to VITAS Hospice and their team of dedicated caregivers, who were an enormous comfort and help to the family in Ruth’s last days. The Monse family will be present to receive friends Friday, February 26, 2016 from 6:00 PM until 8:00 PM at Dettling Funeral Home, 14094 Memorial Drive, Houston, TX 77079. A Funeral Service celebrating Ruth’s life will be held Saturday, February 27, 2016 at 11:00 AM at St. Mark Lutheran Church, 1515 Hillendahl Blvd., Houston, TX 77055. Ruth will be laid to rest in Glenwood Cemetery immediately following services.

Ruth Elizabeth Bower Monse departed this life on February 23, 2016, in the presence of family. Ruth was born in Rose Valley, Pennsylvania, on May 30, 1925, the third of five children of Lawrence Bower and Pearl Heim Bower. She grew up on the... View Obituary & Service Information

The family of Ruth Bower Monse created this Life Tributes page to make it easy to share your memories.

Send flowers to the Monse family.