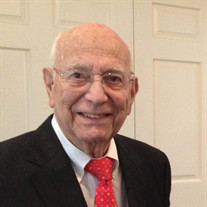 Sam Joseph Mattina, age 96, passed away peacefully July 31, 2019. Sam was the son of Salvatore Mattina and Leonarda Barcellona Mattina of Tampa, FL. Sam was an American Hero. Sam met Alma Rey, the true love of his life, in New Orleans in 1948 while attending Tulane University. They were engaged in 1950 while Sam was in law school at Loyola University and were married November 17, 1951 at Holy Name of Jesus Catholic Church in New Orleans. It was a love story that spanned 71 years. Sam followed Alma to heaven 28 days after Alma was called home. Sam loved his family, set a beautiful example for all with his humble heart, and was very proud of his 5 children and 8 grandchildren. Sam is survived by his children Debbie Mattina Brickner and husband Scott Brickner, Pam Mattina Peters and husband Nick Peters, their children Lauren Peters and Kristin Peters, Patti Mattina Dodson of Austin, her children Nicole Dodson of San Diego and Danielle Dodson Pfeil and husband Jeremy Pfeil of Corpus Christi, Michael John Mattina and wife Kathy Chambers Mattina, their children Kathleen Mattina and Mindy Mattina, Michelle Mattina, and her children Halley Graham and Garrett Graham of Austin. After graduating from Plant High School in Tampa, Sam enlisted in the U.S. Army. Sam received 5 campaign stars for engagement in Normandy (D-Day), Northern France, the Battle of the Bulge, Rhineland, and Central Europe. He was awarded the Purple Heart, 2 Bronze Star Medals, the Victory Medal, and the Combat Infantry Man’s badge. Sam also received the highest French decoration of honor, the French Legion of Honor (likened to the U.S. Medal of Honor). Sam’s Division landed in Normandy at Omaha Beach on D-Day. After pushing forward through the Hedgerow region, the 5th Infantry Division was assigned to the newly created 3rd Army led by General George Patton. The 5th Infantry Division battled through Northern France spearheading the Allied efforts through great German resistance. The 5th Infantry Division then traveled over 100 miles overnight to the Battle of the Bulge. From December 1944 through January 1945 the 5th Infantry Division fought in the Battle of the Bulge, which was the largest and bloodiest single battle fought by the U.S. in World War II. Despite freezing cold weather and low rations, they drove the Germans back into Germany and continued pushing through Germany until they entered Czechoslovakia. World War II ended while they were still engaged inside the Czech border. During the war, Sam was promoted to the rank of Staff Sergeant. After the war he was part of the ROTC and retired from the reserves holding the rank of Major in the Judge Advocate General’s Corps (JAG Corps). After World War II, Sam attended Tulane University graduating with a Bachelor of Business Administration and then earned his law degree at Loyola University. Sam spent most of his professional career with Gulf/Chevron Oil Corporation as a tax attorney and then later in the Governmental Affairs department working with various state agencies and state representatives. The family extends a special thank you to all his devoted caregivers, all the team from Vantage Care, and the staff at the Buckingham. In lieu of usual remembrance the family suggests consideration of a contribution in memory of Sam Joseph Mattina to the Michael E. DeBakey VA Medical Center, Veterans Affairs Voluntary Service – Donation, 2002 Holcombe Blvd., Houston, Texas 77030. The funeral mass will be offered at 10:30 am on Friday, the 9th of August, at St. John Vianney Catholic Church, 625 Nottingham Oaks Trail in Houston, where the Rev. Msgr. James Anderson will serve as celebrant. Immediately following, all are invited to greet the family at the reception in Saint Jude Hall at St. John Vianney Catholic Church. A private family only burial will follow at Memorial Oaks Cemetery.

The family of Sam Joseph Mattina created this Life Tributes page to make it easy to share your memories.

Send flowers to the Mattina family.