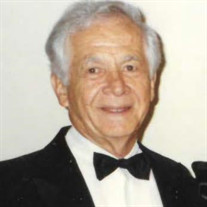 Samuel Lawrence Baiamonte: Foodie, accomplished traveler, fashionista, lucky in love, charmer of charmers, dancing wizard, sculptor, collector, problem solver, not a good skier. Sam was a foodie before they had a Food Channel, wining and dining at the best around the world. He had a life-long love affair with penne pasta and red sauce, fresh figs, sweet potatoes and Campari. Pass the bread pudding if there is any left! Sam was an accomplished traveler, logging thousands of miles every year during his long retirement. Places he loved were visited more than once – multiple crossings of the Panama Canal….five cruises and trips to Alaska. Cruise liners, riverboats and barges in Europe – he loved them all. Sam took fashion cues from no one – fortunately he had a model wife who styled him almost every day of his life. (Who else could rock a bow tie years after they were out of style?) Although he was color blind, his favorite color was green. Lucky in Love, Sam dropped off his family’s produce from their farm in Stafford at Weingarten’s grocery store downtown Houston on Main Street. He ended up with a job there and met and soon married his teenage dream-girl. The most charming of Charmers, always smiling and calming, Sam could defuse a bad situation better than Kissinger. We only remember him losing his temper once: when sons Jerry and Geno climbed up on the roof at night - in the rain and lightning – in pajamas – impatient to hang the outdoor Christmas lights. Sam loved to dance, for a long time he belonged to three dance clubs simultaneously. He excelled at mental acuity – he could fix anything; he routinely showed the repair technicians how to fix their own machines. Well, he could fix anything but Alzheimer’s. Generous beyond all belief, none of us could go on a trip without him handing us a couple of hundred and whispering “the first round is on us”! Natures’ Own Sculptor - if he didn’t find the right Christmas tree he would buy a few extras and, with a drill and saw and some screws, put them together like they should be - he called it buying a tree and an extra for spare parts. He saved everything he thought had a future use; his screw collection alone should go to the Smithsonian! He lived a charmed life; when he was inducted into the armed services during WWII, he somehow got sweet jobs stateside with a typewriter, a Jeep and a card-playing captain. Raised on a farm in Stafford, Texas with no electricity, Sam ended up living the American Dream … right down to buying a $200 cocktail in Tokyo. When he could finally afford it, he drove big Mercedes sedans … but that did not stop him from filling the trunk with tools and tying the occasional extension ladder to the roof. When working on a plumbing problem, a passer-by saw him pulling a pipe wrench from the Mercedes trunk and commented “Plumbing business must be pretty good!” While he was extraordinary at many things, skiing was not his forte. During his first private ski lesson in Aspen, he took out the instructor for the season, crashing into the instructor and breaking the poor guy’s skis. His biggest love – and greatest accomplishment, he claimed – was his family. His wife and children were everything to him and his love and generosity were always this wonderful man’s badge of honor. Although Sam began his work life in the produce section of downtown Houston Weingarten’s, his ambitions ran much higher. A few years as a watchmaker and a blue printer convinced him that success for him was elsewhere. Setting his goals even higher, he started his own business in 1962. The new firm was called Service Photocopy and quickly became the gold standard in world of reprographics, serving a booming oil and gas industry. As his sons and daughter joined the business, new and cutting edge services were added: graphic design, printing, display, and exhibit services. To reflect the expanded technologies, the name changed to Service Inc. visual communication. The company grew into a grand success story - a tribute to this forward-thinking man with strong work ethic. No matter how proud Sam was about his successes, he remained modest and worked diligently on the business until his retirement. Throughout his working career, Sam found time to volunteer at church, with civic groups and with the Boy Scouts. He deeply believed that if you had talents, they should be shared with others. Whatever role he was in – husband, father, boss or friend, he excelled with his generosity, simplicity and caring. You can’t help but shake your head and go “What a great life!” We remember Sam not to grieve but to celebrate his life and the richness he brought to ours. Mr. Baiamonte is survived by his wife Trudy; son Jerry and his partner Larry Knapp; son Geno and his wife Susan with their two children Nick and Gina; daughter, Judy Jo and her husband Chris Ward with her daughter Amanda McGlaun; brother, Johnny Baiamonte and his wife Geraldine as well as nephews, nieces, cousins and numerous admirers. The Baiamonte family will be present to receive friends Monday, October 1, 2018 from 6:00 PM until 8:00 PM at Dettling Funeral Home, 14094 Memorial Dr., Houston, TX 77079. The Funeral Mass will commence Tuesday, October 2, 2018 at 10:30 AM at St. John Vianney Catholic Church, 625 Nottingham Oaks Trail, Houston, TX 77079. A reception will follow Holy Mass on the church campus. In lieu of flowers please consider contributions in Sammy's memory to The Boy Scouts of America at www.scouting.org and The Salvation Army at www.salvationarmyhouston.org .

The family of Samuel Lawrence Baiamonte created this Life Tributes page to make it easy to share your memories.