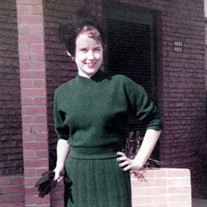 Sara Florence Brewer Ricketts, 87, of Houston passed away peacefully Sunday, October 8, 2017. Mrs. Ricketts was born December 18, 1929 in Woodbury, New Jersey to George and Helen Brewer. She is preceded in death by her husband, Edward Graham Ricketts and is survived by her children, Resa Trent & husband Richard James Trent of Lago Vista, TX, Edward Graham Ricketts, Jr. of Houston, TX, Helen Elizabeth Ricketts Reynolds & her husband Jeffrey Brian Reynolds of Decatur, GA; grandchildren, Richard Beckett Trent, Charlotte Beckett Reynolds; brothers, Robert Franklin Brewer & Wife Gladys of Reeding, CA, George Beckett Brewer, Jr. & wife Joyce Marie of Dennisville, NJ. Sara was born and raised in the Woodbury, New Jersey area. She was very proud of her colonial and revolutionary American ancestry that included Brigadier General Silas Newcomb who fought alongside George Washington and Capt. John Daniels who fought in the Battle of Trenton in the American Revolutionary War. She was extremely proud to join the Daughters of the American Revolution under her patriotic 4th Great Grandfather George Horner of New Jersey whom she proved to the daughters of the American Revolution for the first time as a patriot of the war for independence. Mrs. Ricketts was an animal rights activist for many years, volunteering her time at CAPS in Houston. She was volunteer of the year in 1998 and 2001. Sara loved to travel. She travelled to 6 of the 7 continents leaving the US for adventures more than 60 times in her life. She worked in the travel business for many years at the following firms: Somerset Travel, Four Seasons Travel and Echo Travel. While not travelling for work or pleasure, she was instrumental in assisting her husband in his business, Star Corporation, in the Brazosport area for many years. A Memorial Service celebrating Sara’s life, fondly known as Sallie to many, will be held Saturday, October 21, 2017 at 1:00 PM at Dettling Funeral Home, 14094 Memorial Dr., Houston, TX 77079.

The family of Sara "Sallie" Florence Brewer Ricketts created this Life Tributes page to make it easy to share your memories.

Send flowers to the Ricketts family.