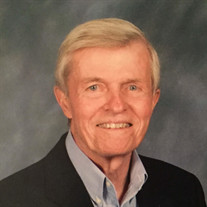 Scott James Elstad was born in Minneapolis, Minnesota on September 7, 1927 to the late Esther Amelia Neilson and Scott Conard Elstad. He was baptized on February 28, 1928 in the church that his grandfather had helped to found, and in which his father had been baptized and confirmed, the Lutheran Church in Independence, Wisconsin. The family lived in Chicago (1928 – 1930), then to Davenport, Iowa (1930 – 1932), and then back to Chicago in 1932 to provide continuity for his schooling. After the death of his mother in 1938, Scott went to Independence, Wisconsin to live with his Aunt Edna J. Elstad and her childhood friend and business partner Alice Wiemer. Scott considered the small town an ideal place to grow up with his dog King, enjoying outdoor activities, baseball, basketball, school plays, graduating Salutatorian and giving the farewell address at his graduation. In 1945 Scott was inducted into the military and was assigned to the 13th Army Air Force near Manila, Philippine Islands after completing cryptography school. After discharge in 1947, Scott attended the University of Minnesota to pursue a Bachelor of Civil Engineering degree and was elected a member of Chi Epsilon, an honorary Civil Engineering fraternity. After graduation in 1951, Scott began his career with Shell Oil in their Marketing Department in Minneapolis designing and building marketing facilities in Minnesota, Wisconsin and Iowa. After meeting Barbara Nelson at a performance of a 1940’s dance band, they married at the Lutheran Bible Camp Chapel in Spicer, Minnesota on June 29, 1952 and settled in Winona, MN. Scott described his wife as the woman who changed his life and became his lifelong companion. A variety of positions with Shell Oil brought increasing experience, responsibilities, promotions and moves around the U.S. including St. Paul, MN, Cedar Rapids, IA, New York City, NY, St. Louis, MO, San Francisco, CA, and Houston, TX. The couple had four children; Susan born in MN, Nancy born in IA, Scott T. and Sally born in MO. Susan and her late husband Denis Anderson have two sons, Paul and David. Scott T. and his wife Kimbrough have one son John. Scott was active in church, school, and neighborhood activities serving on Church Councils in the Lutheran Church, Vice President of the Parent Teachers Association and President of the Westchester Home Owner’s Association. After 38 years with Shell Oil, Scott retired and traveled extensively with Barbara around the U.S. and to locations including Norway, Sweden, Australia, New Zealand, Hawaii, Thailand, China, Singapore, Bali, Java, and Malaysia. Scott described his life as rich, full, and happy filled with family and friends, church, productive work and wonderful experiences. Scott passed away on March 2, 2016. He will be missed by those who loved him dearly. A Memorial Service celebrating Scott’s life will be held Sunday, March 13, 2016 at 2:00 PM at Christ the Servant Lutheran Church, 2400 Wilcrest Drive, Houston, TX 77042. A reception will follow the service on the church grounds. In lieu of flowers, donations may be made to the Scott Elstad Memorial Fund benefiting Christ the Servant Lutheran Church (address above).

Scott James Elstad was born in Minneapolis, Minnesota on September 7, 1927 to the late Esther Amelia Neilson and Scott Conard Elstad. He was baptized on February 28, 1928 in the church that his grandfather had helped to found, and in which his... View Obituary & Service Information

The family of Scott James Elstad created this Life Tributes page to make it easy to share your memories.

Scott James Elstad was born in Minneapolis, Minnesota on September...

Send flowers to the Elstad family.