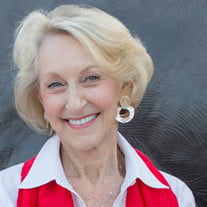 Sherry Brooks Bernard passed from time into eternity on Friday, January 12, 2018, and is now in the presence of her Lord and Savior, Jesus Christ. She passed from this earth peacefully, surrounded by her loving husband Jim; her precious daughter Candis; her dear sister Deby; her faithful brother Ed and special sister-in-law Sue. Sherry was born in Tampa, Florida, on September 18, 1944, the first child of Thomas Woodrow Brooks and Ahlene Grubbs Brooks. They soon moved to Houston, where Sherry later opened/attended Westbury High School. She was Westbury’s first national award-winning student when she won the Distributive Education National Sales Award in 1964. She put that education to good use in a successful career in retail sales, culminating in her role with Mary Margaret McGowan at Westside Lexus, where together for 9 years, they were referred to as “the Dynamic Duo” for setting numerous local and national sales records. Sherry could light up a room with her beautiful smile. Family and friends will long remember her vibrant personality, absolute beauty, dedication to giving and helping others, and her unrelenting work ethic (including her dedication to running and walking numerous marathons); her passion for Houston Cougar sports; and the joy she received from traveling in their motorhome throughout North America with Jim and their special Shih Tzu (Harley). Sherry will also be remembered for sending very meaningful greeting cards on all occasions (and, even on no occasion) just to share her love and thoughtfulness. Sherry and Jim met in July 2001 and were married in March 2003. Each seemed to be God’s gift to the other and their love grew even stronger during the 3 years they battled Sherry’s cancer together. Another of God’s gifts to Sherry was her daughter Candis. Through hard work and unbelievable motherly dedication, Sherry raised Candis as a single-mother most of Candis’ life. Their bond and commitment to each other never wavered, they were always very close, and Candis’ support was especially important during Sherry’s illness. Sherry and Jim faithfully attended Second Baptist Church and were members of the “Cross training” Bible Study Class. Sherry was predeceased by her parents. She is survived by her husband, James I. Bernard; brother Ed Brooks and wife Sue (her “other sister”); sister Deby Butler and husband Eugene; two step children (Scott Bernard and wife Michelle and three stepsons – Trevor, Preston and Kaden, and Dana McPhearson and husband Dean and children Leah and Ian); two nieces (Joy Cashion and husband Chris, and Nicohl Salinas and husband John); four nephews (Gene Butler and wife Shannon, Todd Brooks and wife JoAnna, Ryan Brooks and wife Jessica and Michael Butler and wife Jen); three first cousins (Ron Brooks, Robin Fayles and David Jenkins); as well as numerous great nieces and great nephews. Sherry’s family would like to thank Dr. Pamela Soliman and her staff at M.D. Anderson Cancer Center for their extraordinary efforts, care and kindness; Luisa Rodriguez, for her special care at home; Kat Walters and Teresa Adcock of Houston Hospice for their guidance and care; and all the prayer warriors whose supplications were so obviously heard by our Heavenly Father. In Sherry’s honor, donations may be made, in lieu of flowers, to St. Jude Children’s Research Hospital (www.stjude.org) and/or Citizens for Animal Protection (www.cap4pets.org). Please join us as we Celebrate Sherry’s Life in the Hankamer Chapel at Second Baptist Church, 6400 Woodway Drive, on Thursday, January 18 beginning at 11:00 am.

Sherry Brooks Bernard passed from time into eternity on Friday, January 12, 2018, and is now in the presence of her Lord and Savior, Jesus Christ. She passed from this earth peacefully, surrounded by her loving husband Jim; her precious daughter... View Obituary & Service Information

The family of Sherry Brooks Bernard created this Life Tributes page to make it easy to share your memories.

Sherry Brooks Bernard passed from time into eternity on Friday,...

Send flowers to the Bernard family.