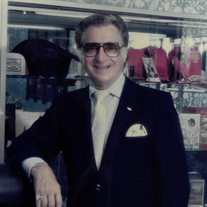 On Saturday, September 26, 2020, Sidney Binder, loving husband, father, grandfather and great grandfather, passed away at the age of 98 in Houston Texas. Sid was born on April 28, 1922 in Kishinev, Russia to Josef and Esther Binder. He was the youngest of 3 siblings-his sister Rachel and his brother Arthur. He traveled by banana boat from Russia to Havana, Cuba, when he was a young boy and stayed there for 4 1/2 years until they were able to meet with his father in America. They lived in New Orleans, LA, and later settled in Houston, TX. Sid only spoke Spanish and Yiddish so getting by in this new country was a challenge, but in true Sid fashion, he overcame that and so much more. He was always a go-getter and never let life’s obstacles get in his way. Sid became a U.S. citizen and joined the Army; he served 3 years in Europe as a Sergeant in Special Service. He married the love of his life, Anna Lipp, and they raised three children: David (Butch), Barbara (Tootsie) and Steven (Pookie). Sid & Anna created many businesses together; they were always such a “dynamic duo”. From drapery cleaners to jewelry stores, to pawn shops, their businesses made them very well known in the Jewish community and in Houston. Of his success in life, he credits his loving wife of 78 years, Anna. Saying, “ I had a good partner to support me, or I couldn’t have done any of this.” They were such a great team with a wonderful family and a large group of life-long friends. They enjoyed traveling the world (specifically Las Vegas) and living life to its fullest. Sid was a member of Temple Lodge #4 in Houston and the Houston Scottish Rite. He was also a member of the Arabia Shrine Temple and spent a multitude of years assisting with the Shrine Circus. His commitment to the Shriners and to the Masons was passed on for 3 generations to his sons, grandsons and great grandsons. Sid valued his faith, his family, and his friends. He was a member of Congregation Beth Yeshurun for over 50 years. Sidney is survived by his wife of 78 years, Anna, his children, David and Barbara as well as his 11 grandchildren and 12 great grandchildren, Funeral services will be held Wednesday, September 30, 2020 at 11:00 AM at the Beth Yeshurun Cemetery, 3502 Allen Parkway, Houston, TX 77019. Please wear masks and observe social distancing to observe state mandated COVID laws. Memorial donations may be made to Shriner’s Hospital for Children. Flower deliveries may be sent to Teisa Binder, 9870 Gaylord, Houston, TX 77024. The family thanks his caretakers and friends at Parkway Place for their loving care.

On Saturday, September 26, 2020, Sidney Binder, loving husband, father, grandfather and great grandfather, passed away at the age of 98 in Houston Texas. Sid was born on April 28, 1922 in Kishinev, Russia to Josef and Esther Binder. He was... View Obituary & Service Information

The family of Sidney Binder created this Life Tributes page to make it easy to share your memories.

Send flowers to the Binder family.