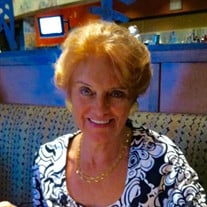 Sonja Stocker Davis, age 81, beloved mother and grandmother and devoted friend, went to be with our Lord on September 24, 2016, in Houston, TX, with her family at her side after a courageous battle with cancer. Known for her boundless energy, positive attitude, kindness, loving nature, empathy and indomitable spirit, she left this world a better place. She brought smiles to faces and spread love and cheer to all who knew her. She was loyal and deeply religious. She had a palpable zest for life and an unwavering devotion to her children which epitomized unconditional love. Her legacy will leave an indelible imprint in the hearts of many. Born in Küsnacht, Switzerland to Swiss parents, Sonja immigrated to the United States in 1958 as a professional hairdresser with the intention of staying for only a year. She fell in love with Texas, however, and never moved back. She married a Swiss, Hermann Stocker, whom she met in Houston at Lakeside Country Club in 1958 at a Swiss-American Society party. They soon became well-known restaurateurs in Houston, opening the Swiss Chalet restaurant on Woodway in 1962, and subsequently two other locations in San Antonio and Austin. They had three children whom they raised in the Hunter’s Creek/Memorial area of Houston. By 1973 the restaurants were sold and Sonja became a full-time homemaker, devoting her life to raising her children in a loving environment, though she instilled a strong work ethic. In 1984 she remarried an American pipeline engineer, Jerry Davis, and moved to Saudi Arabia, where she lived until 1990 before returning to Houston. In those six years, she traveled all over the world including Africa, the Far East, Australia and New Zealand, and the South Pacific. Sonja was a terrific yodeler and accordion player. She loved to travel, garden, and snow ski. She was an animal lover. She loved and cherished her friends, especially those in The Hooter’s Club of the Inverness neighborhood in Hunter’s Creek and the Swiss Club. Her two favorite celebrities were Elvis Presley and preacher, Joel Osteen. She is survived by her three loving children and their spouses: Roy Stocker (Michelle), Yvonne Rathgeb (Tom), and Eric Stocker (Allison); seven grandchildren: Jack, Sofia, Kyle, Griffin, Dean, Erica and Corinne; her sister, Rosa Scott of Boulder, CO; her brother, Robert Peter of Shannon, Ireland; her dog of 12 years, Goldie. Services are on Tuesday, October 4, 2016, at 11:00 a.m. at Memorial Drive United Methodist Church, 12955 Memorial Drive, Houston, TX 77079. Contributions may be made in Sonja’s memory to Friends For Life, a No Kill animal adoption and rescue shelter, 107 E. 22nd St., Houston, TX 77008.

Sonja Stocker Davis, age 81, beloved mother and grandmother and devoted friend, went to be with our Lord on September 24, 2016, in Houston, TX, with her family at her side after a courageous battle with cancer. Known for her boundless energy,... View Obituary & Service Information

The family of Sonja Stocker Davis created this Life Tributes page to make it easy to share your memories.

Send flowers to the Davis family.