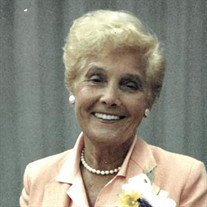 Stephanie Kenefick was born Stefania Maria Lesobey on December 7, 1923 in Jersey City, NJ. She was the fourth of five daughters born to Ukrainian immigrants Gregor and Barbara Lesobey. Stephanie grew up in Jersey City, NJ and after completing her education went to work for the M.W. Kellogg Co. R&D Laboratory in Hoboken, NJ. It was there she met her husband John H. Kenefick,Jr. and married on December 15, 1945. Stephanie gave birth to seven children between 1947 and 1963 and she is survived by all seven: John Kenefick III, Kathleen Houston, Brian Kenefick, Timothy Kenefick, Stephen Kenefick, Eileen Gilmore and Thomas Kenefick. Stephanie also leaves behind twelve grandchildren and six great grandchildren. Stephanie passed away peacefully in the early morning hours of Friday, September 23, 2016. She is preceded in death by her husband of 62 years John, grandson Nicholas and daughter-in-law Sheryle Thomas Kenefick. Stephanie was a devoted wife, mother and Catholic. She was deeply loved and respected by her children and actively participated in their education and activities. Over her 62 year marriage to John, she fully supported his career ambitions and relocated the family from her roots in New Jersey to California, Texas, Brisbane Australia, London England, back to New Jersey and finally to Houston TX. Stephanie always shared a love of travel with her husband John and never let herself forego an opportunity to visit new places. From studying Spanish in Guatemala, holidaying in Mexico, traveling through Italy by train, visiting the Holy Land to see Jerusalem, taking in theatre in London or simply enjoying lunch on the Cote d’Azur, everywhere was something new to enjoy and behold. Inscribed in a photo album of hers is a quote from St Augustine : ‘the world is a book and those who don’t travel read only one page’. Those words defined Stephanie’s love of travel, her love of new places, new experiences, the chance to meet new faces, all fellow travelers on the road of life, to read every page. While living in London, Stephanie discovered she had a talent for art especially oil painting. That soon became her hobby and she pursued it for the rest of her life, painting for her own pleasure but also creating paintings on commission. Stephanie was a devout Catholic and always participated actively in the parishes she belonged to. While living in New Jersey, she served for a number of years as the President of the Women’s Rosary Society and also taught religious education for children and adults wishing to become Catholic. At St. Cecilia parish in Houston, she served as President of the Women’s Club, a Eucharistic Minister and continued to teach religious education. Stephanie relocated to the Bear Creek area in 2005 when she became a parishioner at St. Elizabeth Ann Seton Catholic Church. There she became involved in the religious education program participating for a number of years as a teacher. She was a regular attendee at the 10:30 am Mass every Sunday. In addition to being a very devoted wife and mother, Stephanie Kenefick was also a classy lady who dressed well and took good care of herself through diet and exercise – swimming was a favorite – yet she also enjoyed a great love of cooking and food. She enjoyed good health throughout her life. Until the last three weeks of her life, she only had one hospital visit in 2009 for a broken hip since giving birth to her last child in 1963. Stephanie loved life and had a level of energy to be envied. She will always be remembered as a very positive person with an unwavering faith in God who often said, “Where there is life there is hope”. Life was the gift she received and she strove through her religion, her faith, to be worthy of that gift. Stephanie will be greatly missed by her extensive family and many friends. The Kenefick family will be present to receive friends Thursday, September 29, 2016 from 5:30 PM until 7:30 PM at Dettling Funeral Home, 14094 Memorial Dr., Houston, TX 77079. The Funeral Mass will commence Friday, September 30, 2016 at 2:00 PM at St. Elizabeth Ann Seton Catholic Church, 6646 Addicks Satsuma Rd., Houston, TX 77084. Mrs. Kenefick will be laid to rest in Memorial Oaks Cemetery following Holy Mass.

Stephanie Kenefick was born Stefania Maria Lesobey on December 7, 1923 in Jersey City, NJ. She was the fourth of five daughters born to Ukrainian immigrants Gregor and Barbara Lesobey. Stephanie grew up in Jersey City, NJ and after completing... View Obituary & Service Information

The family of Stephanie Kenefick created this Life Tributes page to make it easy to share your memories.

Send flowers to the Kenefick family.