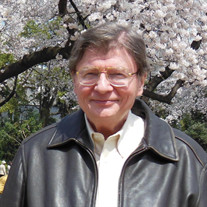 Steven Joseph Maione, age 73, passed away peacefully in his home in Houston on October 15, 2021. He was born in Flushing, New York (Queens) in 1947. Steven went on to receive degrees in Geological Engineerings and a Master of Science in Geology from the Colorado School of Mines in the days of silver diplomas, slide rules and computer punch cards. His thesis was on the Frontier Sandstone stratigraphy of northwest Utah and adjoining northwest Colorado. He began his career in 1971 as a petroleum geologist for Union Oil Company of California in Casper, Wyoming. In 1974, he joined the company's Geothermal Division in California under Dr. Carel Otte, and participated in geothermal exploration in the western USA, The Philippines, Indonesia and Japan. He was on the teams that discovered and developed geothermal fields in the Philippines and Java that now produce several hundred megawatts. In 1992 he returned to oil and gas exploration in Sugarland, Texas, but downsizing at UNOCAL in 1996 allowed Steven to develop a new career in a geological consultant in 3D seismic interpretation and worked for Coherence Technology and Core Laboratory. During this time, he prepared a paper that highlighted the use of Coherence images from a 3D seismic survey that allowed the discovery of ring faults around deflated salt pillows of East Texas. Steven joined Trek Oil & Gas in 2004 and became responsible for interpretation of several West Texas 3D surveys, some of which were proprietary. As Geoscience Manager for Trek Oil & Gas, Inc., in Houston, he participated in step-out well developments in the Bluegrass field, and discoveries at Freedom, Palomino and Thunderbird fields. His interest on Helium exploration resulted in a lecture and paper on the future of Helium exploration in 2004. In 2014, Steven prepared a paper on petroleum potential of a small buried meteor crater of Cambrian-Ordovician age disco verde in one of the proprietary 3D surveys of West Texas. Steven is an Emeritus member of the AAPG (American Association of Petroleum Geologists) and in 2021 became a 50-Year member of that organization. Steven was a licensed Professional Geoscientist with the State of Texas, retiring in 2017. He remained a member of Sigma Xi, the Houston Geological Society and the Rocky Mountain Association of Geologists. He was a son, brother, nephew, cousin, husband, father, uncle, neighbor, colleague and a life-long geologist. Over the years, Steven enjoyed collecting license plates, stamps, postcards and other historically-linked ephemera. He is survived by his wife, Ayako, and his daughter, Lisa. He was preceded in death by his parents, Ralph and Lynn, and his brother, Michael. A remembrance service honoring Steven will be held at Dettling Funeral Home (14094 Memorial Dr, Houston, TX 77079) on Thursday, October 21 at 9:30am; followed by a service at Gleason Funeral Home (10-25 150th St, Whitestone, NY 11357) in Queens NY at 10:00am on Saturday, October 23, 2021; and will conclude with interment at Pinelawn Cemetery in Farmingdale. In lieu of flowers or gifts, please direct any donations to the Colorado School of Mines Alumni Foundation under his name. He loved his alma mater.

Steven Joseph Maione, age 73, passed away peacefully in his home in Houston on October 15, 2021. He was born in Flushing, New York (Queens) in 1947. Steven went on to receive degrees in Geological Engineerings and a Master of Science in Geology... View Obituary & Service Information

The family of Steven Joseph Maione created this Life Tributes page to make it easy to share your memories.

Steven Joseph Maione, age 73, passed away peacefully in his home...

Send flowers to the Maione family.