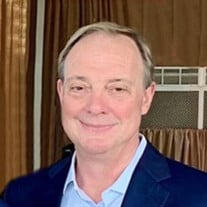 T.M. Hughes III, M.D. unexpectedly passed away on April 24, 2020, at UMC Hospital in Lubbock, Texas. His family was by his side as he peacefully went to the Lord. T.M. was born in McKinney, TX on August 18, 1955 to T.M. Hughes, Jr. and Mary McKnight Hughes. He lived in Van Alstyne, TX until the age of 8 and then moved with his family to Celina, TX. He graduated valedictorian from Celina High School in 1973. He attended Texas Christian University where he met his wife Cynthia Piperi Hughes. They married after college and moved to Galveston, TX in 1978 where T.M. attended University of Texas Medical Branch and graduated in 1982. T.M. completed his General Surgery Training at the Northeastern Ohio Universities College of Medicine and fulfilled his Residency in Urology at the University of Louisville Hospitals in 1987. Later that year, T.M. opened his Urology practice in Houston, TX and remained there until 2008. He and Cynthia left Houston to pursue a “slower” life. For T.M., this meant only working 40 hours a week, which was too slow for T.M. He spent one year in Burnet, TX working for Seton Hospital, and then settled in Midland, TX where he was able to work more hours without Houston traffic (which he loved). During his ten years in Midland, he worked with West Texas Urology, Texas Tech Surgery in Midland, and Odessa Regional Medical Center as their Urologist. Throughout his career, he had many Professional Affiliations. He was a member of the American Urological Association, Texas Medical Association, Midland Medical Association, Alpha Kappa Kappa Medical Fraternity and a Diplomat on the American Board of Urology. He also held many chairman positions of various hospital boards throughout his 36 year career including, Chief of Staff, Chief of Surgery, Medical Executive Committee, Credentials Committee, and By-laws/Rules and Regulations at different hospitals. Dr. Hughes was a dedicated physician who cared about his patients. His sense of humor and love of laughter will be greatly missed in the hospital halls. Although T.M. practiced medicine with great passion, he always made time for his family. T.M. and Cynthia had five children, and he loved being an integral part of their lives. After a long day at the office, he could be seen catching the end of their sporting events or helping them with their homework. While the children were at home, Sundays were for church and family time. You could often find the entire family sitting in the car while T.M. made his rounds at the hospital so they could go to dinner or a movie right after. His family will miss his faith, love, joy and laughter. He, with Cynthia, taught his kids humility, grace, forgiveness, morality, charity, and the importance of God in their lives. T.M. is survived by his wife of 42 years, Cynthia Piperi Hughes and their five children, Catherine Hughes Sult and her husband Anthony; Rebecca Hughes Werner and her husband Matthew; Rachel Hughes Christensen and her husband Kent; Ellen Hughes Delery and her husband Dean; and Matthew Hughes and his fiancé Eleanor Clarke Brennan. He had 6 grandchildren: Tucker, Carter and Wyatt Sult; Graham and Claire Werner; Crawford Christensen; and two more on the way. He is also survived by his sister, Terry and her husband Terry Robbins; his aunts, Jerry Ann Gentle, Betty Hughes and Linda Hughes; his mother-in-law Modie Piperi and his brothers- and sisters-in-law, Ronald and Melonee Piperi and Stephanie and Greg York; and his nieces and nephews, Leslie Chambliss, Lauren Hoff, Kennon Robbins, Natalie and Modie Piperi, and Christopher and Elizabeth York. He is preceded in death by his parents, Mary and T.M. Hughes, Jr.; his father-in-law, Ronald Piperi; and sister-in-law, Elizabeth Nicole Piperi. A funeral mass will be held in Houston on May 12th at 10:30am at St. John Vianney Catholic Church, 625 Nottingham Oaks Trail, Houston, TX 77079. If you plan on attending the funeral in Houston, the church is asking that you spread out between families and wear a mask, due to Covid-19. A celebration of life will be held in Midland at a later date, due to Covid-19. If you would like to attend, please email [email protected] so the family can let you know when the date is set.

The family of T.M. Hughes III, M.D. created this Life Tributes page to make it easy to share your memories.

Send flowers to the Hughes family.