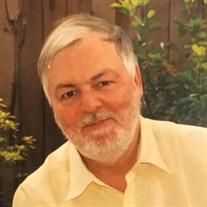 Terry Edward Edgerton, age 78, of Houston was called home to heaven on February 14, 2021. Terry was born December 13, 1942 in Memphis, Tennessee to John and Jimmette Edgerton. He is preceded in death by his parents, sister Anne Cross, brother John Edgerton Jr and son Richard Edgerton. He leaves behind his loving wife Dixie Edgerton, daughter Christine Berry, grandchildren Emma Loo, Joshua Loo, Jordan Loo, Zachary Edgerton and Joseph Berry, niece Carolyn Cross, niece Angie Edgerton and nephew Jay Edgerton. Terry grew up in Memphis Tennessee. He graduated from Messick High School and received his undergraduate degree from Memphis State and Christian Brothers College. He was a proud Sigma Chi alumnus. Terry received his Master’s in Electrical Engineering from the University of Houston. Early in his career as engineer he worked for large aviation, space contract companies developing engineering designs during the mid-1960s moving to Alabama, Florida, Connecticut and eventually one of these companies brought him to Houston. NASA. He worked on a team with other engineers to design a small part of the early Lunar Roving Vehicle. He loved Houston from that point on. In the late 70s he started his own company as a dealer for AutoDesk selling AutoCADs, which led to him and his team developing third party software programs to work with AutoCAD over the years. He developed many lifelong friendships over the years through work and he appreciated everyone he worked with and treasured the journey. Terry was gifted with incredible skills to learn software programs as well as write programs to solve any problem or find a faster way to complete a task. We all knew he would work as long as he could as his work kept his mind sharp and engaged all the way through this past summer. Terry enjoyed his grandchildren and he was available to help them any time day or night. He never wanted to be called grandpa so he came up with GP, pronounced Geep by all. He loved having grandkids – finally sponges to soak up everything he wanted to teach them and many of these things are fondly called “Geepisms”. He loved to teach the grandkids words of the day – they called him Facetious GP. But not limited to only his grandkids, he was always available to anyone that needed help. If he had it and you needed it, then it was yours. He was a great mentor to many - he loved to teach and share his knowledge. And he also loved teaching life to help people, especially his grandkids, to feel encouraged and that they had a purpose. He always had a joke to share to anyone who would listen even if it made you groan. He was a walking “factoid” as he knew so much about everything. And if he did not know it, he would find the answer. He could fix anything around the house and no project too small or big because he always had the right tool. Funny, he laughed at anything that came with a manual because in his mind who needs that, it is much more fun to just put it together – not your typical engineer. He loved living in Houston for over 50 years, this was his home. He had the most unusual “shortcuts” to get around Houston traffic that would leave you at times wondering if you were actually lost. He loved sports, especially basketball. And he loved doing crossword puzzles, he was so quick and smart at completing them. He loved dancing, music, talking, sharing about history and family tales. His humor, wisdom, giving nature and deep devotion and love to our family will be missed. He was a one of a kind and he will be greatly missed by his family, friends, business colleagues and all who knew him. One of his favorite songs by the great Merle Haggard and a favorite to dance to says “I stand right here where I’m at ‘Cause I wear my own kind of hat”. A Celebration of Life visitation will be planned for family and friends – a date has not been set at this time.

Terry Edward Edgerton, age 78, of Houston was called home to heaven on February 14, 2021. Terry was born December 13, 1942 in Memphis, Tennessee to John and Jimmette Edgerton. He is preceded in death by his parents, sister Anne Cross, brother... View Obituary & Service Information

The family of Terry Edward Edgerton created this Life Tributes page to make it easy to share your memories.

Terry Edward Edgerton, age 78, of Houston was called home to...

Send flowers to the Edgerton family.